UPDATE: Danger is all around us, from when we wake up in the morning and get into our cars to when we go to sleep without making sure the bedroom ceiling fan is tightly secured. So there’s no shortage of danger, and no shortage of dangerous sports, so a couple of bonus, more obscure dangerous sports might be of interest to the curious and danger-minded reader. They have been added accordingly, and, it should probably go without saying, should not be attempted at home.

When you hear the phrase “dangerous sports,” your mind immediately turns to things like auto racing or MMA—sports where fiery crashes and bloody faces are commonplace. But here’s thing: if you don’t play the sport, it’s not dangerous. And the vast majority of athletes out there in North America do not take part in auto racing or mixed martial arts. So if we’re talking about “danger” in sports, we’ve got to start with the sports people play most.

And so we did. Today’s list of the most dangerous sports weighs two statistics: the sheer volume of injuries per sport, and the percentage of participants in a given sport who sustain injuries.

As you would imagine, the percentage of MMA and boxing participants who sustain injuries is probably astronomical, but the number of participants is relatively small. So it isn’t on the statistical radar. And since it’s cold hard facts we’re after and not “gut feelings”—which are usually wrong—neither MMA nor boxing make the list. Machine gun freeze tag or machete soccer would also be extremely dangerous if such sports existed, but they wouldn’t make the list because so few people would play them.

"You zorbing, bro?" It's easy to imagine someone asking that question, but odds are it actually doesn't get asked too much, since zorbing is one sport that is unmistakable to those who are familiar with the term. It's when you go into a large, usually plastic orb, and roll downhill. The orb is ostensibly a protective enclosure, but one look at the sport of zorbing and you'll find that isn't entirely accurate.

This actually isn't too far off from the "machine gun tag" mentioned in the intro, but it's actually a real thing so it's good enough for bonus round inclusion. Trainsurfing is basically what it sounds like - participants climb onto the tops of moving trains and hang ten. It is not a good idea.

While it might sound like an enhanced interrogation technique favored by Dick Cheney and Donald Rumsfeld, volcano boarding actually isn't that sinister - although it's just as dangerous. Volcano boarders zip down an active volcano on a board that can hopefully withstand the high speeds and residual heat involved in such an activity. It is also not a good idea. 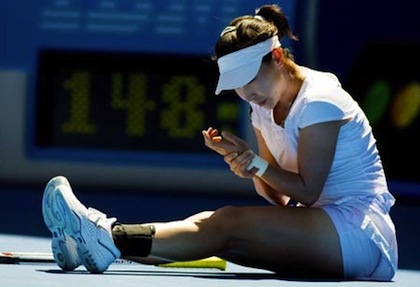 Tennis injuries are pretty much limited to joints and ligaments, so you're never in too much danger. Nevertheless, tennis players sustain a lot of injuries—so it's bound to happen to you sooner or later. There were 87,000 tennis injuries reported last year, which comes to about .14% of estimated tennis players. But we're just talking about injuries that were so back that they required medical attention. You can be sure that the vast majority of sprained ankles and wrists went un-reported. 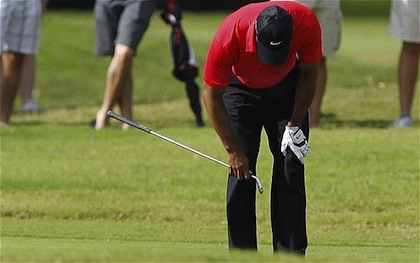 Like tennis, golf doesn't seem like a very dangerous sport, and ultimately it's not (unless you play a lot in Florida and don't keep your distance from the alligators. But people still get injured more than you'd think. Last year .18% of golfers reported injuries, which comes to 127,000. As with tennis, there surely were a lot more that injuries that didn't get reported—probably because most of them were sustained from jumping up and down or smashing their club against a tree in anger. (Or is that just the way I play golf?) 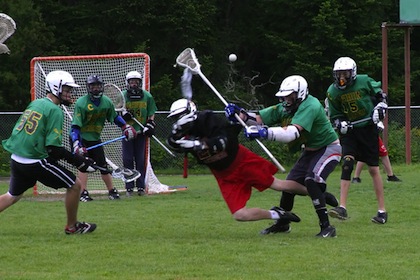 Unfortunately there aren't enough registered lacrosse players out there to know exactly what percentage of them can expect to sustain injuries. But we do know there were about 96,000 of them reported last year, 10th most among all sports. And if you've ever watched lacross, you know it's a gritty game...and sometimes downright violent. 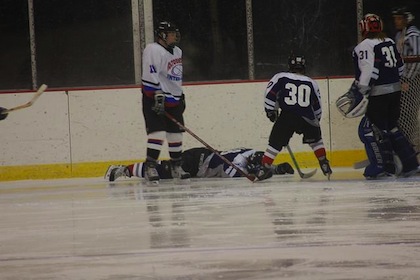 Raise your hand if you assumed ice hockey would be higher on the list. I mean, we're talking about a sport where the pros just accept the fact that they'll lose most of their teeth, and kids have to wear a cage on their head and 30 pounds of protective gear just so they don't get killed. But therein lies the rub: with all that gear, hockey players stay relatively safe. There were only 105,000 hockey injuries serious enough to be reported last year, which was only .57% of the participants. Of course, we all know that, when there are injuries, they're nasty. 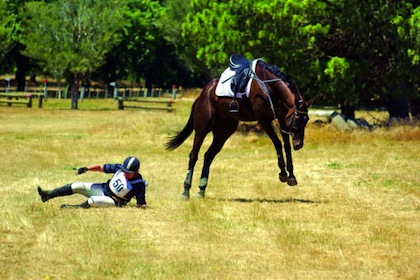 Like lacrosse, we don't have enough data on horseback riding participation to know what percentage of riders get injured. But since horses are kind of expensive and difficult to care for, we're going to assume the vast majority of people don't ride no horses. And that makes the 316,000 injuries reported last year pretty astounding. We're talking 3x the number of injuries as in hockey, but there's no way there are as many horseback riders. So just say no to horses, kids. Your parents (and their checkbooks) will thank you. 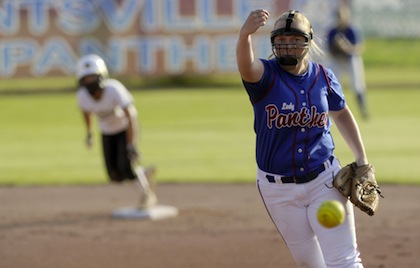 Why is this softball pitcher wearing a Hannibal Lecter mask? Probably because her coach has seen one too many kids get teeth knocked out by line drives. After all, the pitcher rubber is just 43 feet away in softball (instead of the 60'6" in baseball), and a pitcher's follow-through would take him or her (but usually her) even closer. So that's probably has a lot to do with the 1,000,000 (1.11% of participants) softball injuries reported last year. That, and the fact that a lot of people probably play the game drunk on Miller High Life. 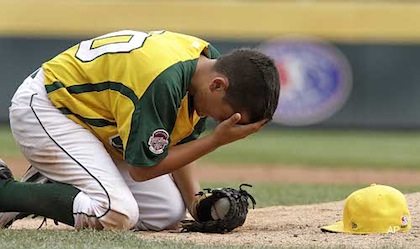 There weren't as many total baseball injuries reported last year (763,000) as softball injuries because more people play softball in one of its various forms (casual slow-pitch or competative fast-pitch) than America's pastime. But the percentage of baseball players who get injured is higher: 1.31%. And if you want to know why, just watch this video. 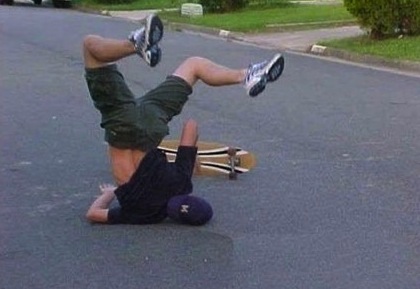 Hardly shocking, is it? The whole point of skateboarding is to do stuff that's dangerous until you master it. And while the official sanctioned competitions wear lots of protective gear, the kids thrashing on the street usually do not—which is why there were 676,000 boarding injuries reported last year, for 1.86% of the participants. That's the second-highest injury rate of any sport. 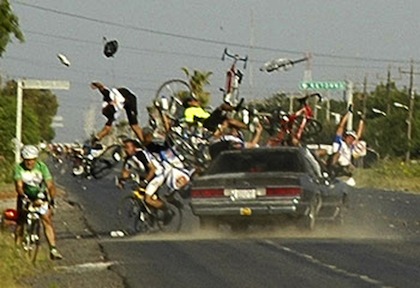 After motorsports, cycling is probably the sport in which you're most likely to get killed. Racing is dangerous. Mountain biking is dangerous. Just riding around block is dangerous. That's why there were 2.49 million cycling injuries reported last year, the second highest total. And the injury rate was 1.29%—not staggering, but the 5th overall and just a half percentage point behind skateboarding at #2. 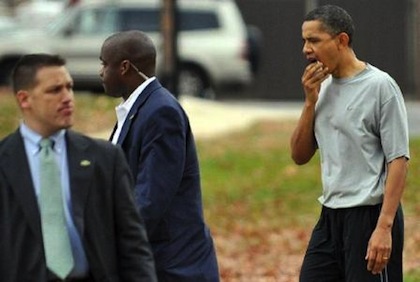 You know, basketball is so popular that we forget how painful it can be. Last year basketball won the overall category with a whopping 2,560,000 injuries reported. And they came in 3rd in the injury rate category with 1.85% of participants getting bruised and battered. The majority of the injuries sustained were, obviously, ankle sprains. There were 258,348 of those, more than any other sport. Basketball also dominated finger and knee injuries, with 198,413 and 175,505 respectively. Oh, and of course the sport was tops in face and cheek injuries with 190,167. (Even the Basketball Player-in-Chief isn't immune from face injuries.) 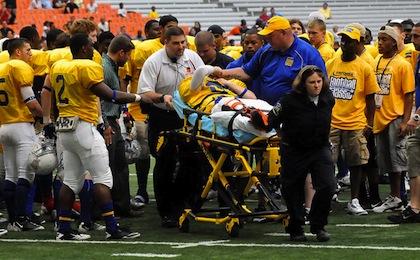 You knew this would be #1 before we even started. But you probably didn't know just how much more dangerous football is than other sports. Sure, it was second in total injuries to basketball with 2,490,000. But there are so many fewer people playing football, which means the rate of injury is astronomically higher: 4.85%. That's right, football players are more than twice as likely to sustain injuries as a player in the next most dangerous sport. And despite all the hullabaloo in hockey about "head shots" this year, football is king of head injuries with 274,455. It's also tops in shoulder (144,896), lower arm (88,266), lower trunk (98,565), and lower leg (88.234) injuries. So play football at your own risk, folks. I'm going to stick to soccer. It's not even on the list.   Source