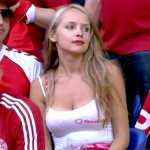 Euro 2012 may only be 4 days old, but it has already given the sports world so much to talk about. There have been accusations of racist slurs, topless protesters, amazing goals, big upsets, and, of course, several outbreaks of fan violence.

Oh, and did I mention all the attractive women? Cause we’ve already spotted a few of them.

For example, there is this lovely woman that was spotted cheering Russia on during their 4-1 trouncing of the Czech Republic on Friday night:

The person who posted this little clip thinks this may be the hottest woman caught on camera at a soccer game. Obviously, he doesn’t watch South American soccer very often. Nor did he happen to catch Denmark’s upset of mighty Holland. If he had, he would have seen this ridiculously hot Dane:

Why the hell was Hamlet so melancholy? Danish girls are amazing!

Needless to say, if you haven’t checked out any Euro 2012 games so far, you’re going to want to fire up the old DVR real quick in order to catch a glimpse of the lovely ladies of the Euro 2012 tournament.