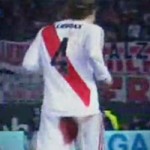 Have you ever wondered what it would look like if a soccer player had a nasty case of hemorrhoids, and they ruptured while he was playing a game?

If you answered “yes,” you’re crazy. Nevertheless, your curiosity is about to be quenched.

Meet Leo Ponzio, midfielder for the River Plate soccer club, which currently plays in Argentina’s second division. Mr. Ponzio was recently playing in a match against rival club Boca Unidos when a wicked case of hemorrhoids flared up…for all the world to see.

And that takes us back to Ponzio, whose hemorrhoids burst during the match against Boca, creating a grizzly seen on the outside of his shorts. So obviously he stopped playing, right?

Wrong. Apparently he wasn’t experiencing discomfort, so he played the whole 90 minutes of his squad’s 2-1 win. He just kept changing his shorts.

Now, as someone who is always giving soccer players guff about being soft (especially the ones named Cristiano Ronaldo), I must say I admire this guy’s perseverance. Still, sometimes you need to just call it a day, especially when your shorts look like like they were used to clean up the mess following open heart surgery.