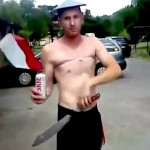 In case you hadn’t noticed, Euro 2012 has been a gold-mine of amazing home videos thus far; however, we’re probably already getting a little tired of watching videos of hooligans mixing it up. So the good news is that what follows is not a video of a bunch of drunk soccer fans rioting. The bad news is that this is still a video of a drunk soccer fan doing pretty stupid stuff.

And in this instance, “stupid stuff” refers to using a machete to chop off the top of a beer can.

My first thought as I started watching this video was, “oh man, this isn’t going to be pretty.” After all, using a machete to open a beer, which you are holding in your hand, is probably one of the 3 or 4 things you really shouldn’t do when you’re intoxicated. For one thing, there’s a pretty good chance you may cut off your hand, or at least a finger or two. And then, even if you manage to avoid that pitfall, it’s probably not the best idea to drink out of the can with a sharp aluminum rim.

So yeah, from the opening frame of this video, I was feeling pretty nervous for this excited, shirtless Polish soccer fan. Luckily his motor skills were surprisingly intact, and the dangerous stunt actually ends up being quite impressive.

Way to not chop off your hand, Pawel!