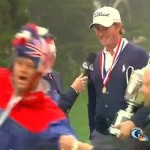 With plenty of former Major champions in the mix heading into the final round of the 2012 US Open on Sunday, few expected that it would be 25-year-old Webb Simpson coming from four shots back to win his first ever Major tournament.  But in the end, we would all learn that sometimes you simply have to expect the unexpected, as Simpson fired an impressive 68 in the final round, winning the US Open with a score of +1.

And speaking of “the unexpected,” I’m quite certain that no one expected Simpson’s US Open Championship interview with Bob Costas to be interrupted by a videobomb from some British dude in a funny hat making bird noises…