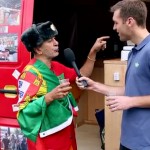 For the past week and a half, former U.S. international Jimmy Conrad has been over in central Europe producing segments on Euro 2012 for KickTV, the soccer-themed YouTube channel run by Major League Soccer.

For today’s episode, Jimmy interviews a guy who just might be Portugal’s #1 fan. And, not surprisingly, the guy has a good feeling in his heart that his team will make the finals this year.

So what are Mr. Portugal’s #1 fan credentials?

Well, he’s followed the team around in his Portugal-themed fan van since 1986. Euro 2012 in Poland and Ukraine? Drove there. The 2010 World Cup in South Africa? Drove there, too. And assuming Portugal qualifies for the 2014 World Cup in Brazil? Yep, he’ll drive there—after having his van shipped to Nova Scotia, of course.

Also a sign that he might in fact be Portugal’s #1 fan—I mean besides the fact that he’s wearing a Portugal jersey and wrapped in a Portuguese flag? The man has no voice. None. The whole interview is given in a scratchy whisper. So it does indeed sound like he’s been screaming his head off for the past 26 years.

You know what, though? This guy actually doesn’t seem all that crazy for someone drinking wine at 9:30 in the morning.

Here, see for yourself:

Cool dude. Don’t know what’s up with that Soviet hat, though.