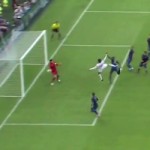 If you follow us here at Total Pro Sports, then you know we’ve been bringing you a lot of coverage from the Euro 2012 tournament.

However, as usual, we’ve been pretty content to leave the nuts-and-bolts coverage to the other guys, and have instead been focused on the so-called “human interest” stories—which is to say, we’ve mainly been doing stories about the crazy, drunk, and occasionally super hot soccer fans and WAGs that have converged on Poland and the Ukraine over the last two weeks.

But we know that many of you haven’t been able to watch the actual games, since they all take place during the middle of the day if you live in North America. So those of you who want to get all caught up on the action but don’t have a lot of free time on your hands, today we’ve got your back.

There were 60 goals scored in the opening round of Euro 2012, and here’s an awesome video that shows every single one of them—in just two minutes. It was put together by the kind folks over at Business Insider.