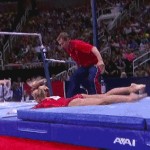 Four years ago in Beijing, Nastia Liukin became just the third U.S. woman ever to win gold in the all-around women’s gymnastics competition.

Her surprising victory at the age of 18—surprising because of her “advanced” age, because teammate Shawn Johnson was more highly regarded, and because the Chinese snuck a bunch of underaged gymnasts into the competition—made her an instant celebrity. Every little girl in America wanted to be like Nastia, and every talk show wanted to have her as a guest.

Fast forward four years later to 2012.  Nasia Liukin is now an ancient 22-year-old, and was trying desperately to extend her career and make the Olympics one more time.

This past spring, after taking a couple years off from competition, Liukin got back into good enough shape to compete in the National Championships. She didn’t do very well there, but she was nevertheless chosen to compete at the U.S. Olympic Trials.

Unfortunately, Liukin’s story does not have a fairy tail ending. Not only did the former Olympic champ fail to make the Olympic team, but she managed to close out her career with an extremely embarrassing face-plant on the uneven bars at the Olympic Trials in San Jose on Sunday night.

And here is said ignominious career-ending fail, preserved forever as a GIF, looping over and over, ad infinitum:

It’s a tough way to go out, but it doesn’t erase the gold medal. So don’t sweat it, Nastia.