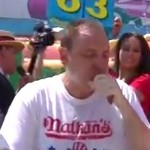 Well, yesterday was the 4th of July, so Americans everywhere celebrated their freedom the only way they know how: by watching a bunch of grown men scarf down hot dogs on ESPN.

Yep, it was the annual Nathan’s Hot Dog Eating Contest held at Brooklyn’s Coney Island. And with about 40,000 people cheering him on in person, plus another 1 or 2 million watching at home, American Joey Chestnut won his 6th consecutive title by tying his own record of 68 dogs (plus buns, obviously) in just 10 minutes.

Anyway, in case you live in one of the few parts of the country not currently besieged by record heat, violent thunderstorms, or massive wildfires, and you spent Independence Day outside with friends and family rather than inside in front of the television, here’s the entire contest.

But be warned. It’s freakin’ gross!

So how did Mr. Chestnut feel about retaining his title? Listen to him talk about it during his post-gorging interview:

The best part about this whole thing? That ESPN reporter’s parents probably paid good money for her to major in communications and get this sweet gig.