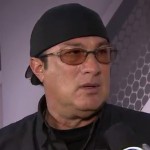 Steven Seagal is not listed as one of Anderson Silva‘s various coaches and trainers.

And he wasn’t in Silva’s corner on Saturday night when he defeated Chael Sonnen at UFC 148.

But that certainly didn’t stop the former action movie star from saying “we” an awful lot when doing a post-match interview on Fuel Saturday.

Now, it is true that Seagal has given a few tips to Silva. In fact, one of these little lessons was caught on video.

However, maybe you noticed that the “training” session in this video doesn’t seems to be taking place at a gym, or some other athletic facility, but in what looks to be a hotel room or conference room. So I don’t know if you’d really call Steven Seagal part of Team Silva.

But you wouldn’t know that by listening to Seagal. Check out this post-fight interview:

I bet Silva’s other coaches are just totally thrilled to hear about how they worked hard with Steven Seagal to get Silva ready for the fight.

Can you tell I’m dubious about Seagal’s actual involvement in Silva’s preparation? Because I am. I can’t find anything in which Silva or one of his other coaches mentions Seagal. Just lots of articles with Seagal talking about it.