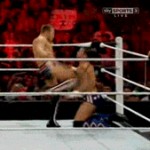 We already knew there was a certain amount of overlap between professional wresting and MMA. After all, Brock Lesnar, a professional wrestler, left the WWE to become the UFC Heavyweight Champion, then returned to the WWE.

Plus, both sports feature scantily clad men engaging in hand-to-hand combat—the only difference is one’s fake while the other is oh-so-real.

But this past Monday, the connection between the WWE and UFC got downright surreal when C.M. Punk decided to pay tribute to the Chael Sonnen–Anderson Silva bout at UFC 148 this past weekend.

How? By reenacting the final moments of that bout during his Monday Night Raw match against Daniel Bryan.

You’ve seen the end of the Silva-Sonnen bout, right? Sonnen tries a spinning backfist but misses, which eventually leads to Silva delivering the decisive knee to the chest.