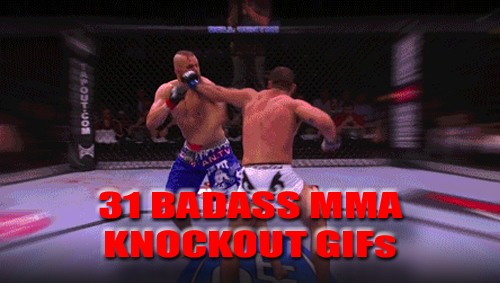 Anderson Silva‘s knockout of Chael Sonnen at UFC 148 this past Saturday was pretty awesome. I mean, come on—knee to the chest? That’s epic. It was so great, in fact, that the WWE’s C.M. Punk and Daniel Bryan reenacted it during their match on Monday Night Raw this week.

So choosing a topic for today’s list of sports GIFs was a no-brainer this week: it’s MMA knockout GIFs. Thirty-one of them, to be precise. It was going to be thirty, but then I remembered one that we already had in another list of MMA GIFs, and I decided I couldn’t leave it out.

Anyway, if you had a rough commute to work today, watch these, then close your eyes and imagine your going to town on everybody who cut you off. (It works wonders.)

You have to watch this one all the way to the end. You think Barry has Kongo down, but then the giant gets up and lays his opponent out with one blow.

I think the knockout blow is the second punch thrown, but it just takes a few seconds for it to set in.

There is not a single body part Silva can't knock you out with. (Yes, if it was legal, he could probably even take you down with his you-know-what.)

After that kick to the side of the head, I think those extra few punches were a little unnecessary.

It's subtle, but you can see Emelianenko catch Arlovski right on the chin, and it just turns the lights right out.

This is the the first of two knockouts on this list courtesy of Tank Johnson. It's good, but the other one is amazing. So stay tuned.

You can't quite see the blows land, but you can see the moment when Linland's light go out. His legs are flailing, flailing, failing...and then they go limp.

Personally, I can't believe this guy survived the first knee to the head. He should be proud of that, even if he did ultimately lose.

One second Torres is chasing Bowles around the ring, the next he's on the ground getting punched over and over in the face. (Incidentally, I'd say the ref probably should have cut this one off 3 of 4 punches earlier than he did.)

Okay, that's good Chuck, I think you got him. (You can usually tell when the guy falls to the mat like a limp rag.)

Obviously Judson there doesn't much care for practicing his defense. Kholer is grateful.

I don't know who these two guys are, but the guy who gets knocked out obviously overestimated the efficacy of his scissor hold.

Chuck Liddell goes down like Joe Glass on Mike Tyson's Punch-Out. (That reference reveals my age, doesn't it?)

That was quite a sudden turn of events. One second he's bouncing around throwing punches, and the next he's facedown and motionless on the mat.

As someone who never has or never will compete in combat sports, I can't even imagine what it would feel like for someone to kick me in the head and then punch me while I was down.

Melvin thinks he'll be all cute and take Lawler out with a leg sweep, but the next thing he knows its Tuesday and there are a bunch of guys in white coats standing over him.

The first punch that knocks the guy down is tough, but the one he gets while lying on the mat is brutal.

Man, this one is like a cartoon. If there would audio, you'd hear somebody yelling "TIMMBERRR!"

The knockdown punch is great, but check out the way Struve's head bounced after Browne smashes it with his forearm. Ouch.

These kicks to the side of the face seem to work every time. If I were an MMA fighter, I would just do that at the start of every bout and, boom, game over.

I wonder if Couture actually saw Machida's foot coming at him in slow motion, the way you see your beer fall in slow motion when somebody knocks it off the table.

Here's a classic from the early days of UFC, all the way back in 1995.

See, Silva has realized the same thing I did (which I explained back in #11). Kicks to the head always work, so just do those every time.

I don't know who these two guys are, and I'm sure they're glad. Cause this is embarrassing.

This is one of the all-time great kicking knockouts. Clean, quick, and hilarious.

In retrospect, it probably wasn't the smartest idea to pull himself up in such a way that his opponent would have a free shot right at him as soon as he was on his feet. That was kind of like giving a soccer player a penalty kick—a sure thing.

Demian Maia takes one of the most amazing falls in the history of combat sports. That must have been one hell of a punch.

This is some from some amateur match that was held in what looks like a high school gymnasium, but that was still one hell of a knockout.

Holy $h*t. Tank Abbott gives one nasty blow, then throws the guy to the ground like a rag down, all crumpled up and half dead. It's obviously the nastiest knockout on this list.