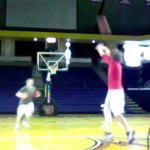 As you may or may not know, there are official Guinness World Records for just about everything. There’s a world record for the most t-shirts worn at one time (245), most people inside a soap bubble (118), heaviest weight pulled with eye sockets (907 lbs), and most expensive dog wedding ($32,000).

Actually, that record for most expensive dog wedding is going to be broken this month when some crazy New York lady spends $200,000 on a wedding for her Coton de Tulear.

Anyway, you get the idea. There’s a record for everything else, so why shouldn’t there be one for most half-court basketball shots made in one minute?

The video you’re about to see shows a man named Adam Beatrice setting this record by sinking 10 of 24 half-court shots in just one minute. It happened back in April of 2011 at Lipscomb University in Nashville, but these things always take a while to get investigated and approved by the folks at Guinness.

Pretty awesome, right? The dude comes pretty damn close to 11, and you would think just hitting 4 in a row might be some kind of record.

In any case, Beatrice made 7 attempts that day, with the record-setting 10 shots made in during his third attempt. In a couple of his other attempts, he successfully drained 7 and 8 shots.