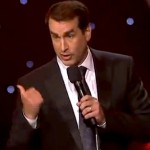 No, that guy in the image to the left isn’t legendary Duke Basketball coach Mike Krzyewskyzkwksew (err, Coach K).  It’s Rob Riggle, star of such films as…um…well, I don’t think he’s starred in any films. However, he has had memorable roles in Talladega Nights, Step Brothers, and The Other Guys, plus some movies that don’t star Will Ferrel, like The Hangover and, most recently, 21 Jump Street.

Of course, if you don’t remember Rob Riggle from any of those movies, you’ll at least recognize him from The Daily Show with John Stewart, right?

No, you don’t watch that?

Well, whatever. The guy is a comedian, he’s in movies, and last night he hosted the 20th annual ESPY awards on ESPN. And his monologue? It was pretty funny.

Riggle managed to find the perfect balance—he didn’t avoid making guys squirm, but he never went over the line, either. The topics included, among other things: Bill Belichck‘s role in “spy-gate,” the Cleveland’s lousy stable of sports teams, Anthony Davis‘s unibrow, Jeremy Lin‘s ethnicity, and whether or not NASCAR is a sport.