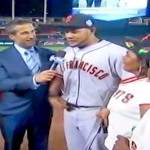 Do you know what Melky Cabrera‘s greatest achievement was at the 2012 MLB All-Star Game on Tuesday night?

No, it wasn’t going 2 for 3 with a 2-run home run and winning the MVP award (which came with a brand new 2013 Chevy Camero). It was somehow managing to be more awkward than commissioner Bud Selig during the post-game award presentation ceremony.

The clip you’re about to watch starts off with the monotone Bud Selig addressing Melky, and recapping his stats, and telling him he had quite a night, and saying he did a great job, and that he deserved the award, and that it was all very special, and…using the coordinating conjunction “and” over and over.

As soon as Selig is done talking you’re relieved, because you assume all the awkwardness is done. But in fact it’s just getting started.

After Melky gets the keys to his new muscle car, the Fox reporter turns to him for a quick interview, and it quickly becomes apparent that Cabrera English no good. When asked who the two women are standing next to him, the All-Star MVP starts thanking the fans for voting for him.

Of course, the difference between Selig’s awkwardness and Cabrera’s awkwardness is that Cabrera is still cute, standing there with his mom and grandma, both of whom are crying because they’re so proud. I doubt Selig was cute even as a baby.