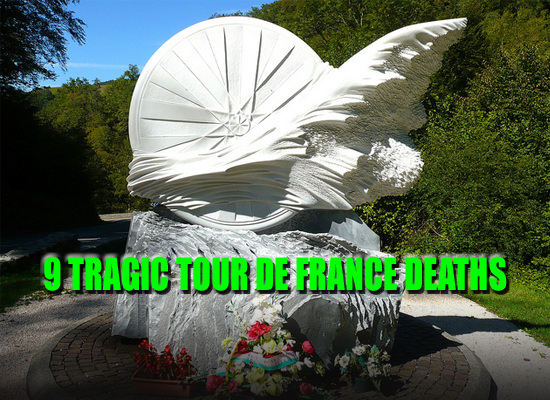 Cycling is not a particularly popular pro sport here in North America. Outside the Tour de France, the sport isn’t followed very closely by the media or fans, and even then the only names we know are the guys who win or get caught doping. Hell, not even Lance Armstrong and his 7 consecutive Tour wins could change this. (Go ahead. Name two of Lance Armstrong’s main rivals. Hell, I’ll spot you Jan Ullrich.)

Anyway, the point here is that there is a lot people still don’t know about the sport. But today we’re taking one tiny step toward changing this fact by proving one thing: pro cycling is actually an extremely dangerous sport—and not just for the athletes, but for fans as well. At least every couple of years there is a prominent death at a major cycling event, and the Tour de France is no exception.

So here, for your sporting knowledge, is a list of 9 tragic Tour de France deaths. They aren’t the only fatalities in the history of cycling’s most prestigious event, but they are the most notable.

Actually, don’t enjoy. That would be weird. 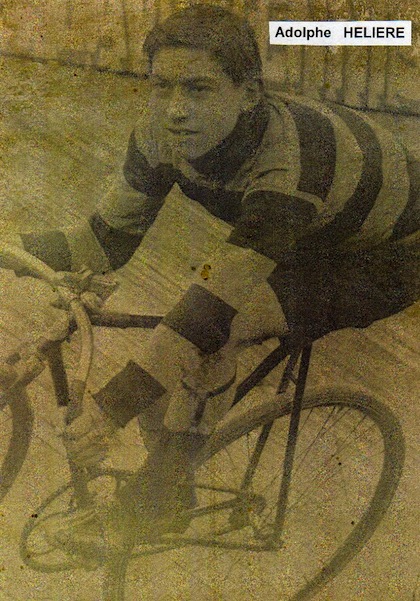 On July 14, 1910, the Tour de France experienced its very first fatality. However, the victim was only killed by cycling indirectly. You see, cyclist Adolphe Helière didn't die during the race. He died while swimming in Nice on an off day. However, there seems to be some disagreement as to the cause. One version of the story says he simply drowned, and if this is true you would have to believe exhaustion played a role in it. Another version of the story, perhaps embellished over time, say he died after getting stung by a jellyfish. That hardly seems likely, but either way, he wouldn't have been there if not for the Tour de France. 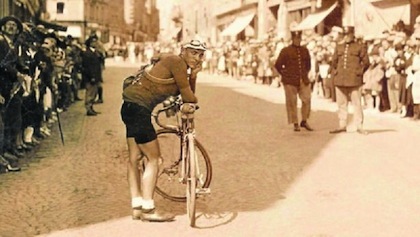 In 1935, the Tour de France saw its second fatality. And this time there could be no debate as to the cause. During the 8th stage, a mountainous one between Grenoble and Gap (a mountain village in the French Alps), Spanish cyclist Francisco Cepeda was making his descent down a mountain when he lost control of his bike and plunged off a ravine on the Col du Galibier. Sadly, he died on the way to the hospital. 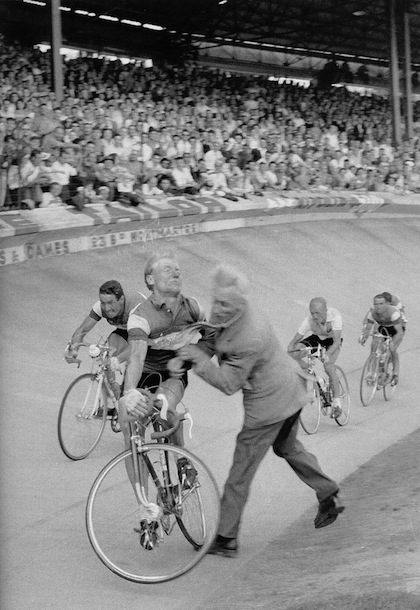 This one has to be the strangest and, in a way, most tragic Tour de France death—the strangest because of who it involved, and the most tragic because of when it happened. You see, Constant Wouters was the director of the Parc des Princes, a stadium in western Paris that served as the finish line for the Tour de France from 1903 until the late 1960s. Thus, it was on the last day of the 1958 Tour—July 19—that Wouters, who should have known better, stepped too close to the track and collided with cyclist André Darrigade. Darrigade suffered a fractured skull and some broken ribs, but he was able to take a lap of honor after the race was over. Wouters, however, was more seriously injured, and he died 11 days later. 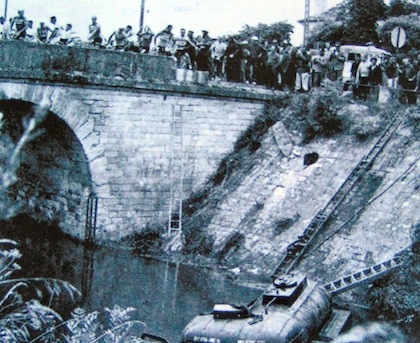 The previous Tour death may be most tragic in a poetic sense, but this one is most tragic in a mathematical sense. On July 11, 1964, cycling fans lined the route of the 19th stage from Bordeaux to Brive, in the Dordogne region. At around 1:30 PM, as they waited for the pack of cyclists to arrive, a tanker truck came up around a bend too quickly, lost control, and crashed through the wall of spectators, over a bridge and into a canal. This horrible incident took the lives of 20 people, and is one of the biggest tragedies in French sports history (right up there with the 1955 crash at Le Mans).

6. The Tragedy at Dordogne 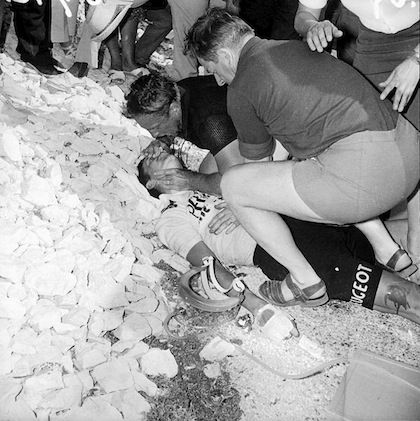 In 1967, British cyclist Tom Simpson made everyone realize just how problematic doping was in the sport of cycling when he died while climbing Mont Venteaux during the 13th stage of the Tour. An autopsy showed amphetamines and alcohol in his system, and it was concluded that these, combined with searing heat, had caused a heart attack. The guy was just 29 years old. 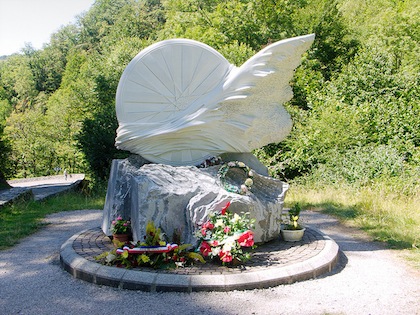 This is the most recent case of a cyclist dying at the Tour de France. On July 18, 1995, during the 15th stage of the Tour, Olympic gold medalist Fabio Casartelli of Italy crashed while descending the Col de Portet d'Aspet mountain pass at 55 mph and hit his head on concrete blocks lining the road. Obviously he was wearing a helmet, but—wait, no, scratch that. Casartelli was not wearing a helmet. So I guess we'll never know if the helmet might have saved him. (Doctors and medical examiners debated the issue for quite some time.) 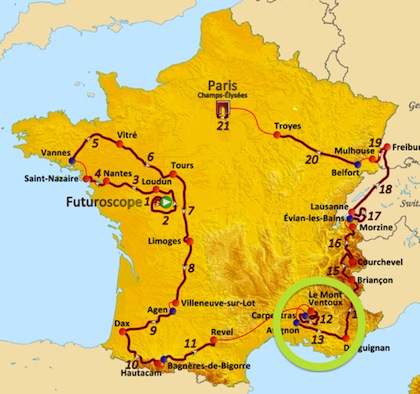 In 2000, a 12-year-old boy from Ginasservice in southeastern France was killed after being struck by a car on the side of the road during the 13th stage. Apparently a driver was tired of being stuck behind the media caravan, so he recklessly tried to pass them, striking the boy (whose name is unknown). Eventually, the driver was charged with manslaughter, and rightly so. Three days after the tragedy, on July 18, the riders honored the boy with a minute of silence before the 16th stage. 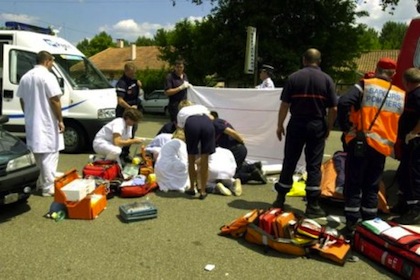 Just two years after the horrible 2000 death of a 12-year-old boy, another young spectator lost his life at the Tour de France. This time it was a 7-year-old boy named Melvin Pompele. In the village of Retgons, about 16 miles into the 10th stage on July 18, 2002, the boy saw his grandmother on the other side of the road and tried to cross over to her. That's when he was struck by a car in the publicity caravan (i.e., a bunch of cars that follow drive along the route advertising various things) and killed. At this point, in case you're wondering, I should mention that, no, there are no barriers preventing spectators from wandering out onto the course—just like there are no barriers preventing pedestrians from wandering out onto the road any other day. 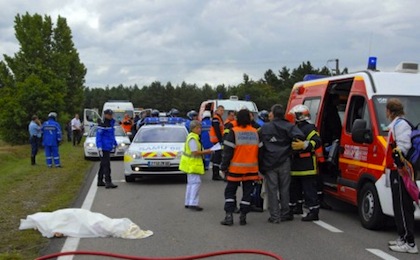 Finally, we arrive at the most recent Tour de France death. On July 18, 2009 (wow, July 18 is an unlucky day at the Tour), during the14th stage, a woman in her 60s tried to cross the road and was struck by a police motorcycle. The incident occurred in the French village of Wittelsheim, which is in the northeast where France, Germany, and Luxembourg meet. Apparently the woman tried to cross after a group of breakaway riders had passed, not realizing that a police motorcade was following close behind.