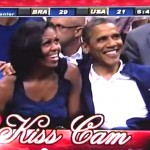 Whether or not you’re a fan of his politics, you have to admit that Barack Obama is the coolest President the United States of America has ever had. The guy smokes, drinks beer, has a hot wife, sings Al Green at press conferences, and, of course, is a pretty serious baller.

That’s why fans at last night’s Olympic basketball tune-up between Team USA and Team Brazil at the Verizon Center in Washington, D.C., were so disappointed when the President and First Lady refused to smooch on the kiss cam.

That’s right, the POTUS and FLOTUS were at the game and were featured on the jumbotron during a break in the action, but they actually got booed when they refused to make out.

No one likes to get booed, obviously. So I guess the President and First Lady had a quick consultation with their political advisers during the game and decided that the next time they were featured on the kiss cam, they’d give the people what they wanted.

Just like a politician, isn’t it? Giving up on his values in the face of public pressure.

Hat Tip – [Outside the Boxscore]