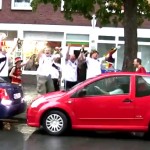 We know what German soccer players are up to these days. But what are German sports fans doing to pass the time between the end of Euro 2012 and the start of the 2012 Sumer Olympics?

Just about anything, apparently. And that includes getting drunk on the street and cheering on people as they try to parallel park their cars…

In the following video, you see a poor woman holding up traffic while she struggles to parallel park her compact Citroën (insert sexist joke here).  She’s having a tough enough time as it is, but for some reason a bunch of intoxicated soccer fans—beers in hand, silly hats on head—have gathered around the car to cheer and jeer her every move. One of them even takes it upon himself to play referee.

Of course, when she finally makes it into the spot, they all cheer like Bastian Schweinsteiger just hit the back of the net.

You have to admit, it’s pretty funny. Still, the Olympics can’t start soon enough. These people need something to do.