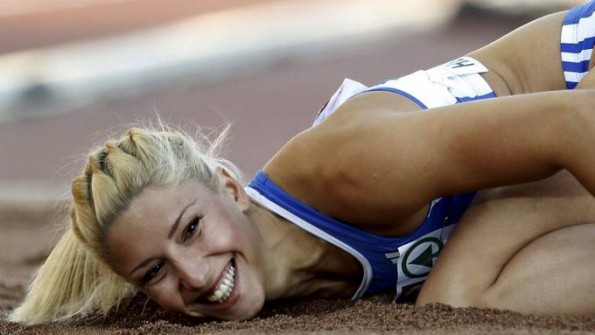 The Olympics are supposed to be a time when athletes of all colors, nationalities, religious, shapes and sizes can come together and celebrate sportsmanship and unity (which is depicted through the five interlocked rings of the Olympic symbol–which represent each of the five participating continents) with one another…

With the start of the 2012 London Games just a few days away, most athletes have been focused on the task at hand, as they look to represent their country with pride, and maybe even take home their very own Olympic medal.  As for Voula, she seemed to be more concerned about the effect that the increased number of Africans in Greece will have on the appetite  of her country’s West Nile mosquitoes, as she Tweeted the following:

(Which reads, “with so many Africans in Greece, at least the West Nile mosquitos will eat homemade food.”)

With their country in the midst of a grueling economic depression, Greek politicians have plenty of issues to concern themselves with at the moment, but that didn’t mean they were simply going to turn a blind eye towards Papachristou’s racist Twitter remarks.  In fact, they did anything but turn a blind eye, as they decided it was only fitting to ban her from participating in the upcoming 2012 London Games.

“Racist humor and ”jokes” concerning human lives are not tolerated by the Greek society, can not thrive in Greek athletics. The least the Greek Olympic Committee can do now is to revoke Ms Voula Papachristou from the Olympic Games. Watching the Olympics on TV screen, she could do as many vile ”jokes” she wants through the social media. But for sure, she can not represent Greece in London.”

So, was Papachristou’s Tweet worthy of an expulsion from the Olympic Games?  Or did the Greek Olympic Committee go a little too far in their punishment of the triple-jump athlete.  I’ll let you make that call.