Cowboys Owner Jerry Jones: “I Want Me Some Glory Hole” 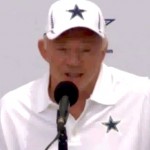 Well, that depends. If you’re a rich Texas oil tycoon like Dallas Cowboys owner Jerry Jones, a “glory hole” is a specific type of oil excavation.

On the other hand, if you’re pretty much anybody else, a “glory hole” means something else altogether.

(It has to do with sexual gratification, and that’s all I’m going to say. If you don’t know, just look it up yourself when you get home from work.)

I kid you not. Check it out:

Luckily for Jerry, the Cowboys VP of public relations and communications, Rich Dalrymple, was on hand to explain that his boss (who didn’t seem to understand why everyone was laughing) was not talking about something that George Michael would do in a Beverly Hills restroom. If not for that, we’d all have the wrong idea about what to expect from the Cowboys during the upcoming NFL season.