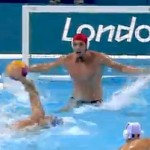 There are some sports we just don’t cover too much here at Total Pro Sports. It’s not that we don’t like them. It’s just that the highlights are kind of hard to come by.

But right now that is not the case. With the 2012 Summer Olympics in full swing, we can bring you amazing highlights from all sorts of obscure sports we normally don’t see. And today’s highlight comes from the Olympic water polo tournament.

What you’re about to see is Marton Szivos of Hungary scoring what seems (at least to this non-water polo expert) to be an absolutely incredible goal. His teammate passes the ball behind him, but he uses his foot to flick the ball up to his hand (which I guess is legal), then fires a backhanded shot past the Romanian keeper and into the net.

If Lionel Messi played water polo, this is the kind of stuff I would expect from him on a regular basis.

Oh, and in case you’re wondering, the Hungarian men’s water polo team has won the last three gold medals at the Summer Olympics, and nine overall, which is twice as many as any other team. However, the 30-year-old Szivos, who plays for club team Groupama Army, was not on any of the previous three teams.

Hat Tip to Business Insider for the video.