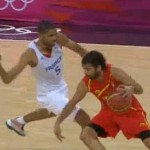 France was eliminated from the 2012 Olympic men’s basketball tournament earlier today after losing their quarterfinal game to Spain by a score of 66-59.  And while this may have been the last that we will see of this French team in London, they certainly left their mark…

Unfortunately for Spain’s Juan Carlos Navarro, that so-called “mark” left by the French team is located squarely on his groin, as he was punched there by France’s Nicolas Batum during the dying seconds of today’s game.

Clearly frustrated by his team’s failure to upset a stronger Spanish team, Batum decided to take that frustration out on the manhood of Navarro while attempting to stop the clock with a foul on his opponent.

I guess if you’re going to take a foul, you may as well make it worth your while.  It sure appears as though Batum did.  Check it out: