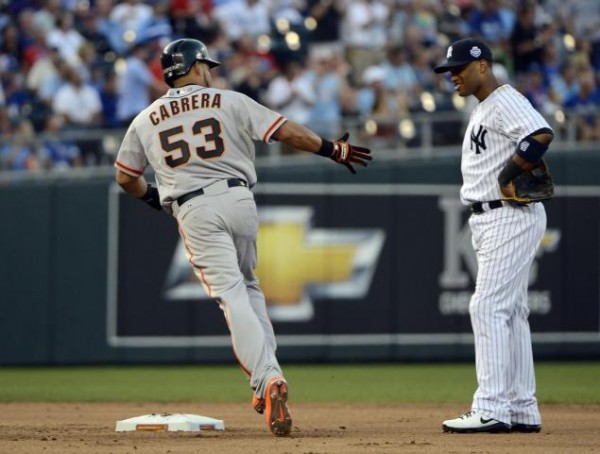 Unfortunately, we learned last week that there’s a perfectly good reason for this stark improvement in Melky’s game: steroids. The guy was busted by an MLB drug test and banned for 50 games, dealing a pretty big blow to the Giants’ chances of making the playoffs.

It was just another case of a guy getting caught cheating…until Sunday, when the entire story took a rather odd turn, as it was revealed that Cabrera and/or one of his “associates” were involved in a bizarre scheme to beat the PED rap and avoid a suspension.

You see, according to Major League Baseball’s official drug policy, if a player can prove that they ingested a banned substance unintentionally and through no fault of their own, they won’t face a penalty. So a guy named Juan Nunez had probably the best idea anyone has ever had: set up a phoney website for a phoney supplement, then tell the MLB that Melky only used that product and had no idea it contained steroids.

Brilliant! I mean, nobody would look into a health and fitness product that supposedly contains illegal drugs, right? Not Major League Baseball investigators, and certainly not the Food and Drug Administrators…Oh wait, that’s not right. Everybody would look into such a product. So there’s no way this cover-up scheme could work without some kind of X-Files-esque conspiracy involving the President and an advanced race of space aliens.

And that’s probably why the website was taken down after just a few days.

However, enough people noticed the fake site, and everything leaves a trail. So now the Feds are on the case, and someone is bound to end up in jail. The only question is who?

Oh, and did I mention that Nunez is a “paid consultant” of Melky Cabrera’s agents? Well, he is, and although he is claiming that the whole “fake website” thing was his idea, if there is anything leading back to the agency or to Cabrera himself, this story could get even more awesome.

So yeah, this isn’t just your typical steroids scandal. And the best could still be yet to come.  So stay tuned.