>Total Pro Sports
MLB
White Sox Fan Dances Like Nobody’s Watching…But Everyone Is, And They’re Laughing At Him (Video)

White Sox Fan Dances Like Nobody’s Watching…But Everyone Is, And They’re Laughing At Him (Video) 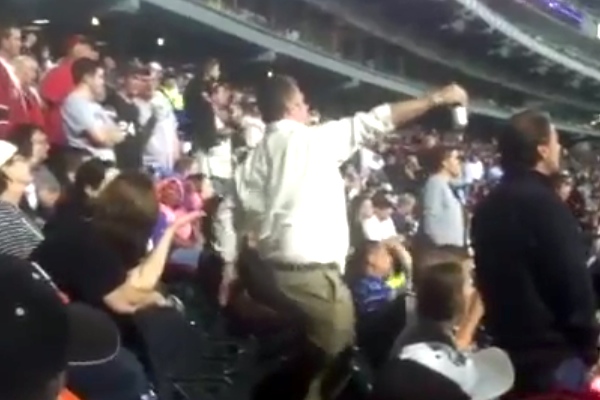 Over the last two Major League Baseball Seasons, we’ve been treated to some pretty awesome dancing.

But the guy you’re about to see takes the cake. And by “cake” I mean the award for lamest baseball fan ever.

You see, at a recent White Sox game at U.S. Cellular Field, Lady Gaga’s “Edge of Glory” came on over the PA, and one very enthusiastic man in a yellow oxford shirt and khakis decided to let go of his inhibitions and just feel the music. Unfortunately for him, “feeling the music” meant riding and slapping an imaginary bronco while holding his beer straight out in front of him.

The only good thing about this whole scene is that he was too wrapped up in the song to notice how everyone in his section was laughing at him.

I’m surprised the Southsiders put up with this nonsense. Seems more like something you’d see at a Cubs game.