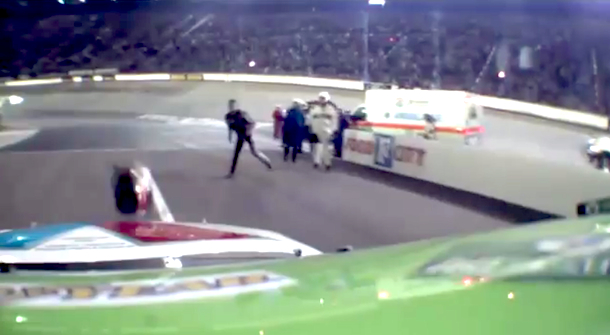 For years, the Bristol Motor Speedway was the toughest ticket in NASCAR. Its short, half-mile track meant cars were crammed together like sardines, and it’s steep banking meant there was only one lane for them to get by each other—a recipe for lots of paint-swapping and flared tempers, which is pretty much everything NASCAR fans want in a race.

Then in 2007, Bristol chairman Bruton Smith ordered changes to the track—progressive banking—that diluted the action and drove fans away. But as a result of the decrease in attendance, he ordered them to change it back to the way it was for this season.

The result? Though it’s not the same track it once was, the action is definitely back.

All you need to do is look at the Irwin Tools Night Race that went down this past Saturday. It was full of the contact and angry confrontations that made the track famous, including some dangerous helmet-throwing from Tony Stewart and some nasty finger-wagging from Danica Patrick.

The helmet-throwing incident came after Matt Kenseth and Tony Stewart locked fenders and wrecked during lap 334. Though the announcers chalked it up to good old-fashioned Bristol racing, Stewart thought Kenseth was to blame. So as Kenseth drove by him in pit row, Stewart threw his helmet at the guy’s car.

Later on, during lap 436, Regan Smith bumped into Danica Patrick and sent her flying into the wall, ending her night. And afterward, when he passed by the scene of the wreck while the caution flag was still out, Patrick walked over to him and gave him the finger-wag of shame.

In the end, it was Denny Hamlin who won the race. But the big story is that Bristol is back as one of NASCAR’s best events.