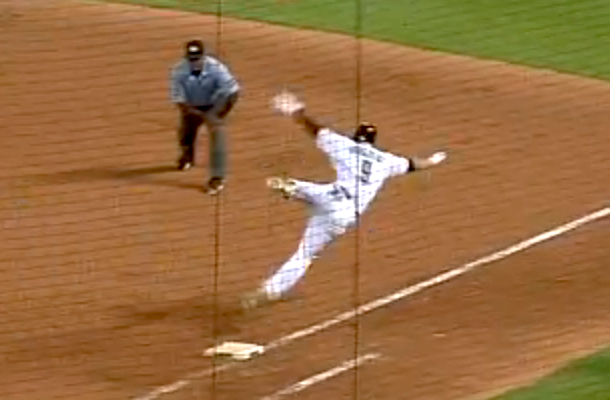 You might recall that, just a few weeks ago, we told you about how the woeful Astros blew a chance to steal a game from the first place Nationals with an epic series of blunders in the top of the 11th inning. It might have been the most awful series of plays we’ve seen all year.

Well, last night, during a game against the San Francisco Giants, Marwin Gonzalez gave us a highlight to rival that one. With one out in the bottom of the 9th and his team trailing by 4 runs, Gonzalez made a solid effort to leg-out a ground ball and get on base. However, when he finally got to the bag, this happened:

Apparently Gonzalez left the game with an ankle sprain and is listed as day-to-day. But you have to respect a guy who’s hustling for a last-place team in August, right?

Still, it’s pretty hilarious. I’ve watched this replay about 15 times now, and I still don’t know how the heck this happened.