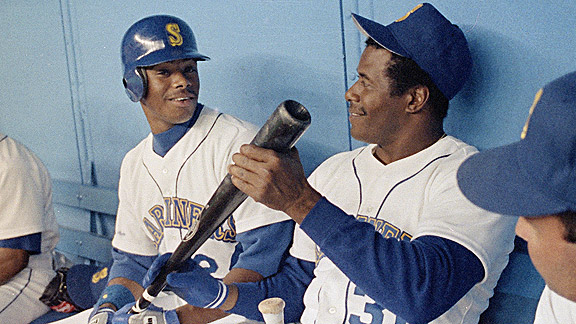 It was on this day in 1990 that Ken Griffey Sr. and Ken Griffey Jr. became the first father and son to play on the same team at the same time.  In their first game together they hit back-to-back singles in the first inning and would later come around to score.

Ken Jr. was selected with the first overall pick in the 1987 amateur draft and it did not take him long to make it to the Majors.  Less than two years later, at the tender age of 19, Griffey found himself as the starting center fielder for the Seattle Mariners.  Meanwhile, his father was in the twilight of his career and had been released by the Cincinnati Reds, leading to his signing with the Mariners. The Griffey’s would end up playing a total of 51 games together before Ken Sr. retired in May of 1991 at the age of 41.

On October 4th 2001 Tim Raines Sr. and Tim Raines Jr. joined the Griffey’s as the only father and son to play on the same team at the same time.  The Raines’ shared the outfield together as Sr. played left field and his son played center field for the Baltimore Orioles.

Here is a quick look at Ken Griffey Jr.’s career.