MMA Fighter Taunts His Opponent, Then Gets Knocked Out Cold (Video)
MMA

MMA Fighter Taunts His Opponent, Then Gets Knocked Out Cold (Video) 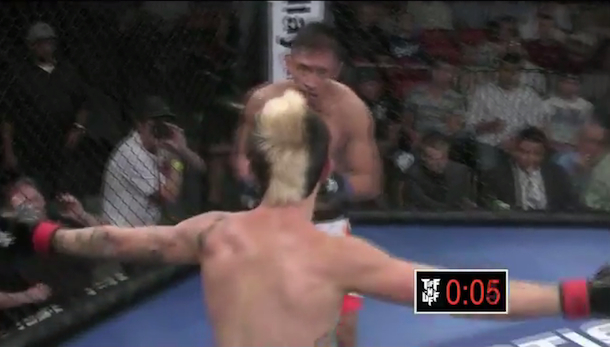 Note to MMA fighters: if you’re going to taunt your opponent, do it before or after the match begins, like Chael Sonnen. Do not do it immediately after sustaining a barrage of punches to the face, like Shai Lindsey did.

At the Tuff-N-Uff Festibrawl 3 on September 2 in Las Vegas—an event said to promote “the future stars of MMA”—Lindsey took on Carlo Juinio. With just 15 seconds left in the second round, Juinio landed a flurry of shots to Lindsey’s head.  But rather than go on the defensive and simply try to make it out of the round alive, the little mohawked man laughed and held up his arms, as if to say, “Is that all you got?”

Well, it wasn’t. Juinio promptly knocked the dude out cold with a left-footed kick to the side of the head.

You gotta love it when a jackass gets his comeuppance.