There are lots of reasons why some people prefer college football over the NFL—the traditions, the gameday atmosphere, the historic venues, the rivalries, you name it. But personally, what really does it for me are teh mascots. And I’m not talking about the guys dressed as in giant plush cartoons. I’m talking about the real live animal mascots used by schools all across the country. I mean, why go to an NFL game and pay $9 for a beer when you can go to a college game and get your picture taken with a live tiger?

Today we celebrate one of the things that makes college football so much fun with this list of the 25 best real animal mascots. Some of them are pretty standard; others are more unusual and exotic. But in every case they are beloved by their respective schools. So take a look. 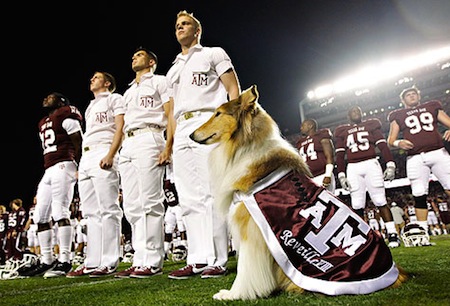 A Collie doesn't seem like that cool of a mascot to me, but they're totally crazy about Reveilles as Texas A&M. How crazy? Well, they constructed an electronic scoreboard by the grave sites of all the previous Reveilles outside the football stadium so the dead dogs would always know the score. (So, pretty crazy.) 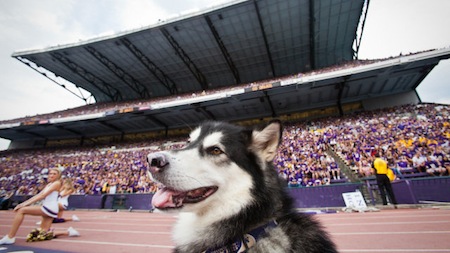 Ready to have your mind blown? Dubs here is not a Husky. He's an Alaskan Malamute. WTF, right? Anyway, the current Washington Huskies mascot took over for another Malamute named Spirit a few years ago. 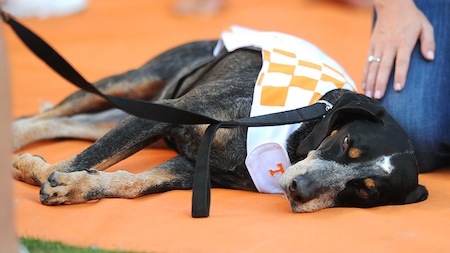 In 1953 the students at the University of Tennessee chose the original Smokey, a Bluetick Coonhound, as the school's mascot. Today, as you can see, Smokey IX has no trouble napping on the job. 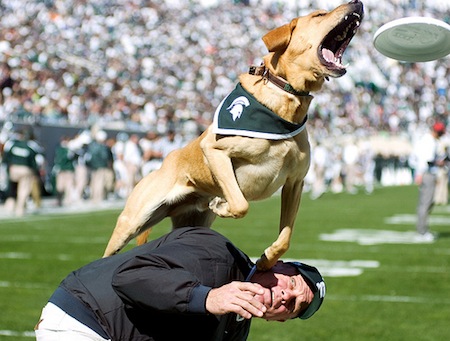 The original Zeke, who started performing during halftime at football games in 1977, is the only non-human to ever receive a varsity letter at Michigan State. The current Zeke is officially names Zeke III, but really he's the fourth halftime dog. The second was named Keze, and I guess after Keze was hit by a car and killed they figured they should have named her Zeke. So after Keze they had Zeke II, and now Zeke III. 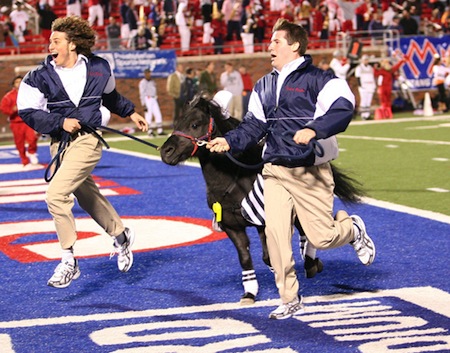 So, the Southern Methodist University Mustangs have a Shetland Pony as their mascot, which is kind of weird. Fortunately, when the NCAA gave the football program the "death penalty" in 1987, that didn't entail putting down little Peruna. 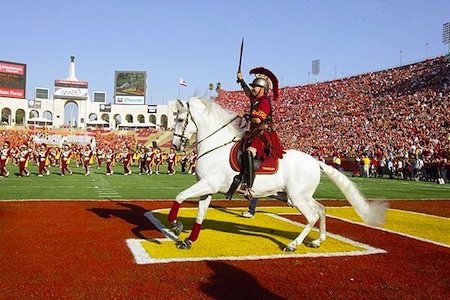 Traveler first made his first appearance at a USC football game back in 1961, and the guy who rode him wore the costume Charlton Heston wore in Ben Hur, which is awesome. The current Traveler VII is a purebred Andalusian horse, which probably means he was very expensive. 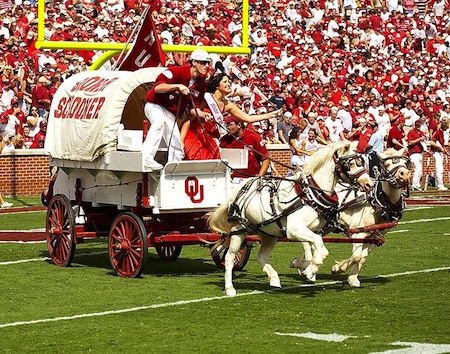 Technically, the Oklahoma Sooners' mascot is the Sooner Schooner—you know, the Conestoga wagon. However, since it's lame to have an inanimate object as a mascot, students and fans have become attached to Boomer and Sooner, the white ponies that pull it. 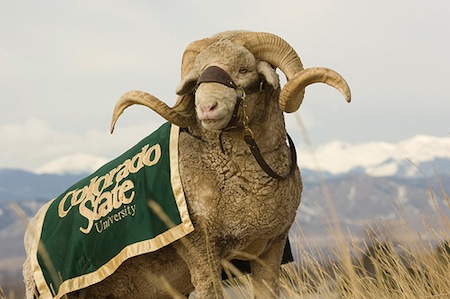 Prior to 1957, Colorado State was actually called Colorado Agricultural and Mechanical College. Hence, "CAM" wasn't chosen for their bighorn sheep mascot simply because it rhymed with "ram." 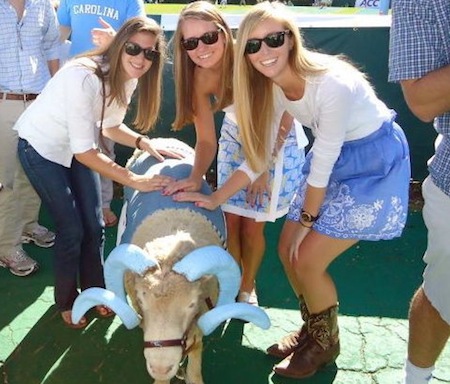 Since a "Tar Heel" is not a good mascot, UNC also has Rameses the Ram. I wonder how he feels about having his horns painted powder blue.

There is a fun legend behind Bill the Goat. Once upon a time, a particular U.S. Naval vessel had a pet goat. When that goat died at sea, two sailors were entrusted with taking it's skin the taxidermist once they were back on land. But on the way to the taxidermist they stopped at the Navy football game...where one of them decided to wear the goat skin. Navy won the game, and the goat has been their mascot ever since. Or so the story goes. 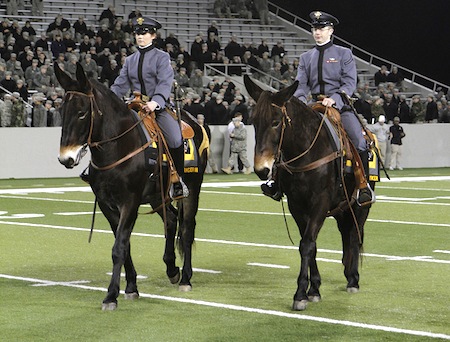 West Point adopted mules as mascot for their football team back in 1899 because somebody decided they needed an animal to counter the Navy goat. So there's another good reason to go see a game at Michie Stadium. 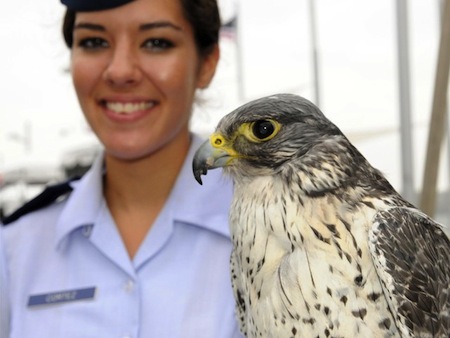 Not to be outdone by their armed forces counterparts, Air Force—who has the best football program of the three—has a real live falcon that flies around during the games. Of course, at the 2010 Independence Bowl, the falcon flew away, which was problematic. Luckily they used the homing device on his foot to locate him a few hours later in downtown Shreveport. 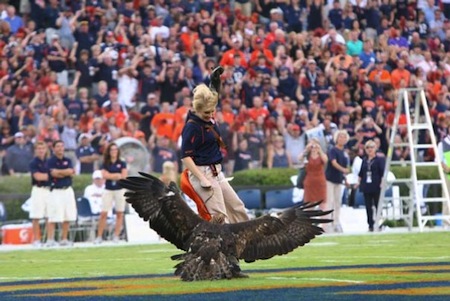 The Air Force Falcon is nice, but the Auburn War Eagle is better—if nothing else, than just because of its awesome name. In fact, I think I'm going to start insisting that people call me "War Eagle." Of course, you eagle-eyed readers (see what I did there?) will surely be scratching your heads saying, "I thought it was the Auburn Tigers?" And it is, officially. But for some reason the term War Eagle became a battle cry for Auburn way back in the day, and it's been around ever since. 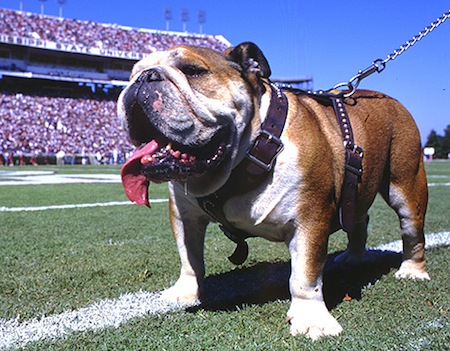 At #12 we have the first of four bulldogs, which is by far the most common mascot in college sports. This one from Mississippi State is oh-so-cleverly named Bully. 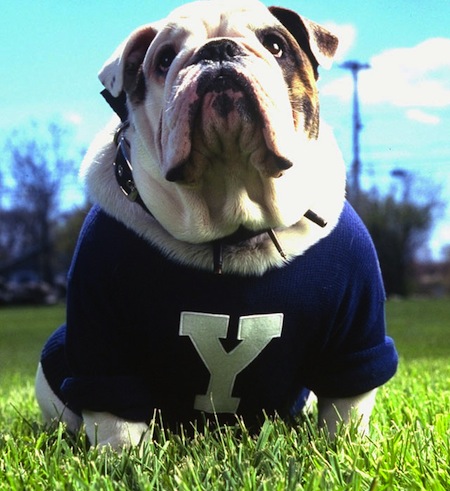 Yale's mascot Handsome Dan gets the award for "most awesome bulldog mascot name." It's a shame Yale football is so bad. 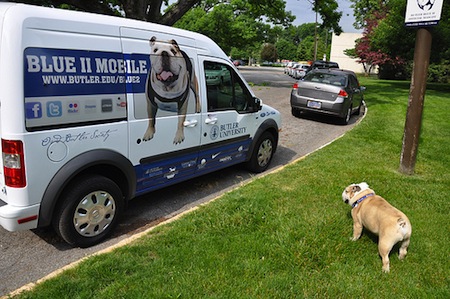 Blue II is our second straight Division I-AA bulldog mascot. Though his name isn't as awesome as the previous pooch, he gets one spot higher on the list because he has his own car. 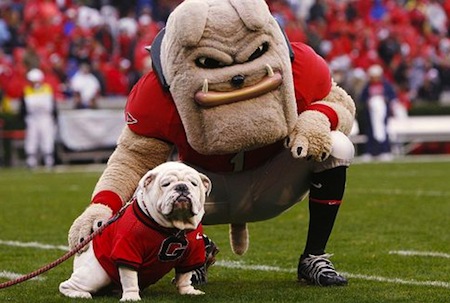 The best bulldog mascot in college football is, without a doubt, Uga VIII. Because any dog that does this is okay by me. 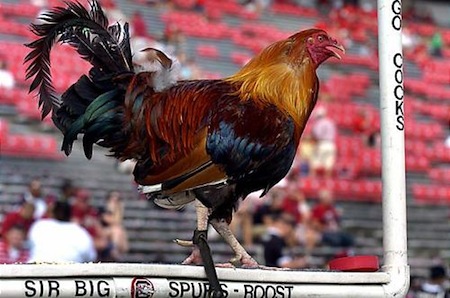 I would be embarrassed if my school's mascot was a chicken—oops, sorry, rooster—named "Sir Big Spur." But they really embrace it at South Carolina, and if nothing else you have to admire their steadfast loyalty to the bird. 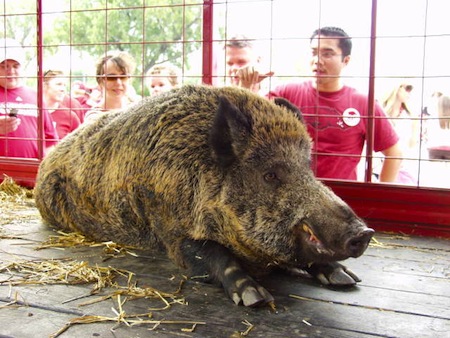 Tusk III took over mascoting duties for his brother, Tusk II, who died on January 5, 2010. Of course, all three Tusks thus far have been Russian Boars and not genuine wild North American razorbacks. Oh well. 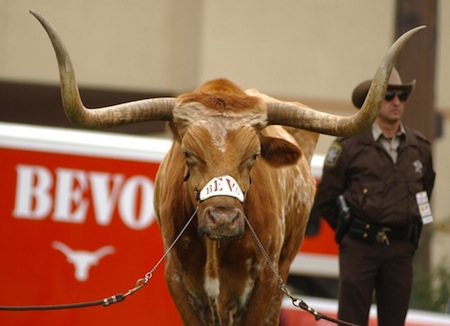 Prior to 1916, the University of Texas mascot was a pitbull named Pig. However, they switched to the more regionally appropriate longhorn steer in 1916, when an alum named Stephen Pinckney raked together $124 from fellow alumni to purchase Bevo I. 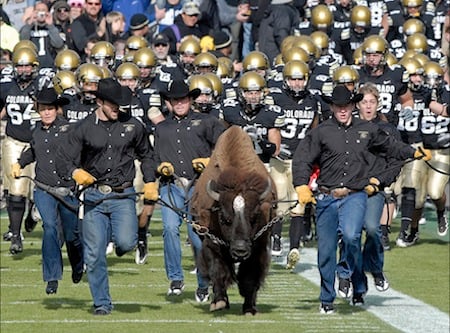 A real live Buffalo that they run out onto the field before football games? Yeah, now we're getting serious. Of course, despite the name, Ralphie IV is actually a female, as male buffaloes would be too large and/or aggressive to handle. 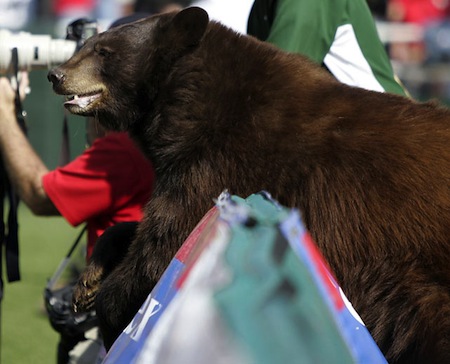 The Baylor mascots have a peculiar nomenclature. You see, in 1974 the students voted that all future live bears should be called "Judge" in honor of the school's namesake, Judge R.E.B. Baylor. But then they also give the bears second names to honor important university figures. Currently there are two bear mascots. Judge Joy Reynolds (just "Joy" for short) is named after the wife of a former university president, and Judge Sue Sloane (just "Lady" for short, pictured here) is named after the wife of—you guessed it—another former Baylor president. 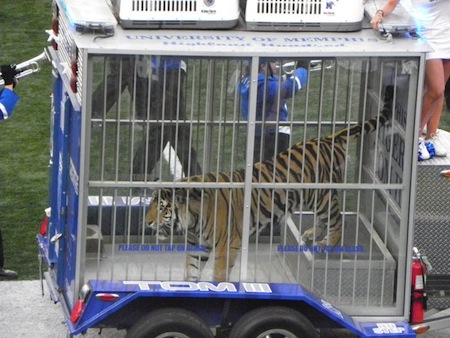 TOM is an acronym for Tigers of Memphis. Ironically, this Bengal Tiger actually lives at a facility in northern Mississippi. He just travels to Memphis on game days. 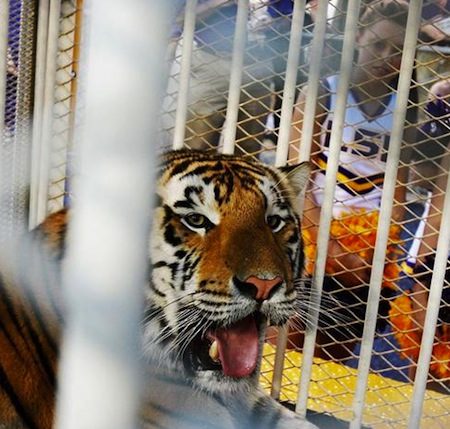 You know you're a hotshot animal mascot when you have your own website. In 1934, the very first Mike the Tiger was brought to the LSU campus by Athletic Director Mike Chambers. Today, Mike VI (who is apparently one of the more ornery Mike's in LSU history) lives in a gorgeous 15,000 square foot habitat built in 2005 at a cost of $3 million. So, yeah, this tiger has a better life than you. 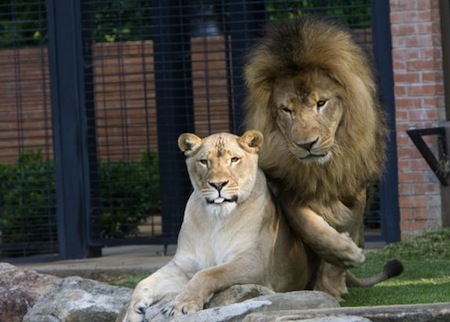 Trust me, I was surprised as you to learn that a Division II football program has two actual lions as mascots. But it's true. And how can you beat two lions? Anyway, Leo III and Una live right there on campus, next to the president's residence, in the George H. Carroll Lion Habitat—a 12,000 square foot climate controlled facility that cost $1.3 million to build and $35,000 annually to maintain.