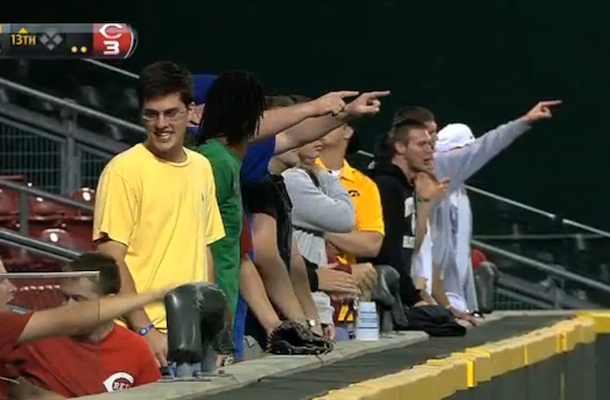 We’ve seen a lot of odd behavior from baseball fans this season. First there was the Mets fan who pretended to trip and fall in front of television cameras. Then there was that guy at the Rays game who showed off his sweet, sweet dance moves. And of course, let’s not forget about the dude who got wasted and peed his pants at a Tigers game.

Still, I don’t think we’ve seen anything as bizarre as what we saw Monday night in Cincinnati.

You see, it was “Bark in the Park” night at the Great American Ball Park, meaning fans could buy special packages that allowed them to bring their pooches to the Reds’ game against the Pirates. However, the game ran a little long, so most people who brought their dogs didn’t stay until the end.

But apparently, the fans who did stay to see Ryan Ludwick‘s walk-off single in the 14th inning really missed the canine companionship. So in the top of the 13th inning, fans all over the ballpark started howling like dogs.

Do I really need to say it?  Really?