Nerves Of Steel: This Tennessee Volleyball Player Just Ignores The Mizzou Fan Screaming At Her From Inches Away
NCAA

Nerves Of Steel: This Tennessee Volleyball Player Just Ignores The Mizzou Fan Screaming At Her From Inches Away 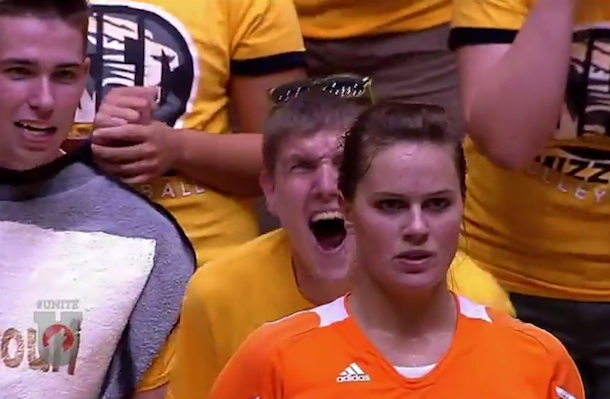 Much was made of the University of Missouri’s football debut in the SEC conference last weekend, a 41-20 drubbing at the hands of the No. 7 Georgia Bulldogs.

However, all the other sports programs at Mizzou are also joining the SEC this year. And the most recent team to make their SEC debut was the women’s volleyball team, who took on the Tennessee Lady Vols Wednesday in Columbia, Missouri.

The result? A thrilling come from behind upset for Missouri over the defending conference champs. But that’s not what anyone (except for the Missouri players) will remember from the game. Instead, all anyone will remember is the whacked-out Mizzou fan going berserk about a foot away from a Tennessee player…and that Tennessee player’s ability to simply ignore him.

Check out the video:

Talk about intense. I mean, I love women’s volleyball as much as the next guy, what with those amazing uniforms and all. But this fella is going to have an aneurysm or something. In fact, he should probably stop by the campus health center today and have himself checked out. Just in case.

As for the guy to his right, wearing the Missouri door mat as a poncho? He’s alright in my book.