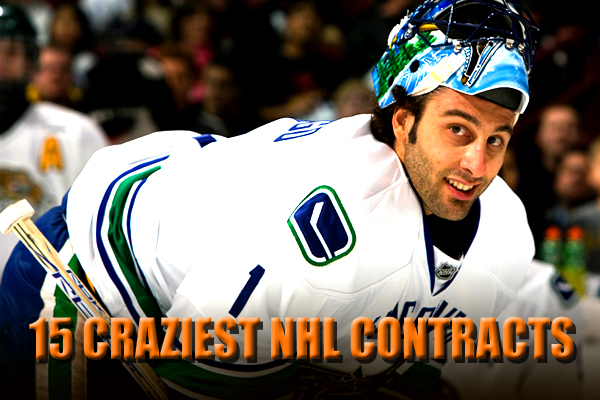 Well, the NHL officially locked out the players over the weekend. Now the entire 2012-13 season is in jeopardy, just 7 years removed from the 2004-05 lockout that cost us an entire season.

The great irony here, of course, is that the owners are complaining that they aren’t making enough money and demanding pay cuts for the players. Meanwhile, over the last 5 years, these same owners have spent like there’s no tomorrow when signing big-name free agents. And they’re going it to circumvent the rule that they forced the players to accept the last time around—the salary cap.

You just couldn’t make up a stupider, more maddening scenario. So today, to prove just how ridiculous this lockout is, we present you with the 15 craziest contracts in the NHL today.

What makes them crazy, you ask? Well, it’s some combination of length, value, and return. Some of them aren’t that outrageously pricey, but they are ridiculously long. (This is a contact sport, after all.) Others aren’t quite as long, but they pay a fortune. And, of course, others just overpay a player for diminishing contributions.In any case, the larger point, ladies and gentleman, is that this insanity is why there might not be any hockey this year. And I think I speak for hockey fans everywhere when I say “thanks a lot, rich jerks.”