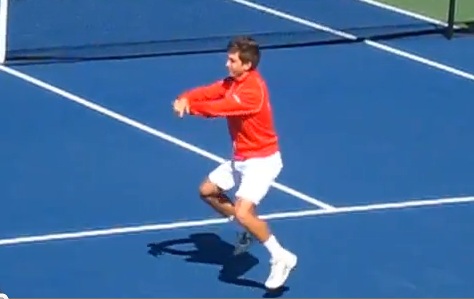 Canadians have never been much of a force in the tennis world, but that could all be changing.  In addition to 21-year-old Milos Raonic, who is currently ranked 15th in the world, Canada is also home to up-and-coming tennis stars Felip Peliwo, 18, and Eugenie Bouchard, 18, who won the 2012 Wimbledon Junior Boys and Junior Girls titles, respectively.

In fact, Peliwo would go on to win the US Open just two months later.  And he also made it to the finals at this year’s Junior Boys Australian Open and French Open.  So yeah, it appears as though this kid could have one heck of a tennis career ahead of him.  And if that does turn out to be the case, he may want to find a new victory dance, because the “Gangnam Style” isn’t really working for him.

You see, Peliwo didn’t participate in a match during Canada’s Davis Cup qualification against South Africa over the weekend, but he was in attendance as a practice player.  And after victories by Raonic and Vasek Pospisil sealed the victory for Team Canada, Peliwo was ushered onto the court in Montreal to take part in his initiation onto the squad.  And yeah, it was pretty embarrassing stuff.