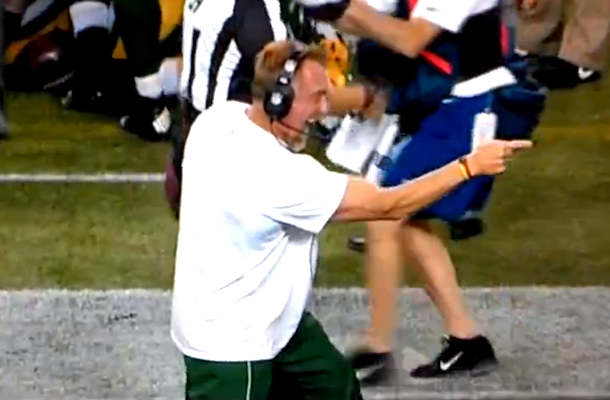 Last night’s Packers-Seahawks game had one of the most controversial endings of all time, with an apparent last-second interception by M.D. Jennings being ruled a touchdown by Golden Tate instead.

However, that wasn’t the only Packers interception that got overruled last night. Earlier in the 4th quarter, an interception by Jerron McMillian was negated when linebacker Erik Walden roughed the passer. And in this case, the call was legit—you can’t hit a quarterback low, especially after he throws the ball.

Still, at first the Packers were pretty excited about the interception, as it would have given them possession just six yards out of the red zone, on the Seattle 26. And perhaps most excited of all was outside linebackers coach Kevin Greene. Before the interception was negated, he did a little hoppy kung fu point celebration dance.

It was pretty great. Take a look:

Kind of makes you wish you could have seen his reaction when the refs gave that game-winning TD to Seattle, doesn’t it?