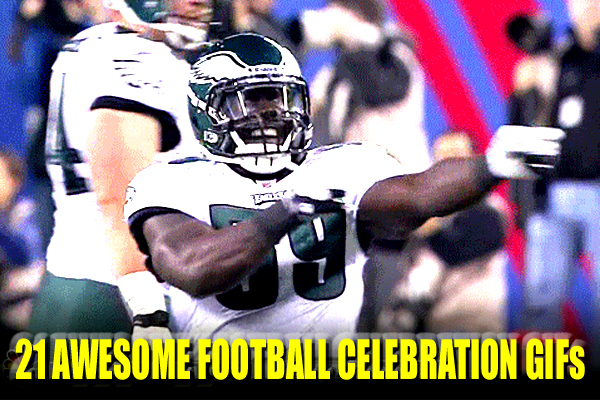 Every sport has its own distinct style when it comes to celebrating big plays. But in North America, when it comes to enthusiasm and creativity, nothing beats the football. Scored a big touchdown? There’s a dance for that. Made a big interception? There’s a dance for that, too. Sacked the quarterback? Yep, another dance. Kicked a field goal, recovered a fumble, got a first down, downed a ball at the 5-yard line, won the coin toss? They all have a dance. Or a jig. Or a special handshake—some gesture with which to commemorate the occasion. And today we bring you 21 of these amazing football celebrations in their perfect form: the animated GIF.

Poor kid. That's like the touchdown celebration equivalent of an air ball.

Take me home country road. Actually, scratch that. Better take me to the hospital so I can get an MRI. I think I'm concussed.

Oh, that's so cute. The big fella is so excited. It's like coach just told him he's taking the whole team to Chucky Cheese after the game.

The Baltimore Ravens' Ray Rice must be a weird dude. Who flops around like a fish after a touchdown?

This is why the 49ers' Vernon Davis does not play basketball.

They say imitation is the sincerest form of flattery. So, really, the replacement ref (wherever he is now—an interstate toll booth, perhaps?) should take this as a compliment.

Poor Matt Cassel gets totally ignored by his teammates, but it doesn't bring him down. He picks himself right up and continues the celebration. What a pro.

I hate to burst your bubble, but it's not really called the "Discount Double-Check." Aaron Rodgers' signature TD celebration is actually him putting on an imaginary WWE championship belt.

You know, Kyle Vanden Bosch isn't the first rival to steal Aaron Rodgers' signature move. However, usually people do it when they're actually playing Rodgers—you know, as a way to rub it in his face. If you do it against another opponent (in this case, the Vikings), then you're basically just a copycat.

13. The Other Championship Belt

Is spiking the football sidearmed the TD celebration equivalent of movie cops holding their guns sideways? It seems kind of badass to me.

Oh Gronk. So much talent, yet such a doofus.

What's funnier—the fact that this guy's name is Kerwin*, or that he spiked the football into his own nads after a touchdown? *Kerwin Bell, former QB of the CFL's Toronto Argonauts.

Wouldn't it suck if the only thing people remembered you for was tearing your ACL while celebrating a field goal...during your rookie year? (Yes, it would. Right, Bill?)

Dude, you still only get credit for one touchdown reception.

Viking's kicker Chris Kluwe is now famous for his scathing open letter to Maryland State Assemblyman Emmett Burns. But, obviously, in addition to being an excellent writer, he's got some pretty great dancing skills.

As much as I enjoyed Kluwe's rendition of Gangnam Style, I must say that Bengals TE Jermaine Gresham has him beat. Because, really, anybody who's over 250 pounds and dances like this is awesome.

So here's the story with this one: apparently the Longhorns player was about to taunt the Ole Miss fans after scoring a touchdown. But then this ROTC guy said, uh, the mother$#@&ing hell you are, dill weed. It's pretty awesome, really.

"Say hello to my little friend." I'm sure Roger Goodell loves seeing stuff like this—it's exactly the kind of image (gangsta) the NFL is trying to cultivate.

I have to say that Sean Weatherspoon's sack celebration is one of my personal favorites. (Though I guess that's obvious, given that I put it here in the #3 spot.)

Von Miller's bucking bronco dance is pretty awesome. I think it might be the next big thing. (All he's got to do is get Kate Upton to do it in a bikini.)

No matter how much they try, nobody in the NFL will ever be able to top this celebration. And let's hope they never try.