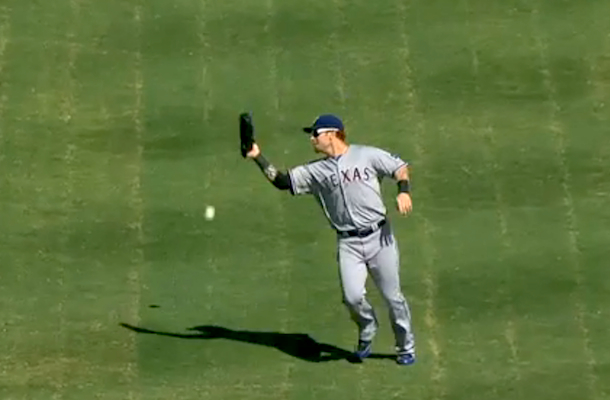 The Oakland Athletics were 13 games behind the Texas Rangers on June 30. Then they lost three starting pitchers from their rotation in the span of a month, with one of them—Brandon McCarthy—suffering a terrifying, life-threatening injury.

So what happened to the A’s after that? They went 17-8 down the home stretch, putting together two separate 6-game winning streaks.  That allowed them to pull into a tie atop the AL West with the defending AL champion Rangers heading into the last game of the season.

Of course, it just so happens that the A’s were playing the Rangers on the last day of the season. So yesterday’s game in Oakland was essentially a one-game playoff to determine the winner of the AL West. And when the Rangers got off to a quick 5-1 lead by the third inning, most people were probably thinking they would hold on to win the division.

That’s right, in the bottom of the fourth inning with the score knotted at 5-5, the Texas Ragners’ best player, Josh Hamilton, dropped a lazy fly ball that would have ended the inning, allowing two runs to score. And that officially opened the floodgates. The A’s posted another run in the 5th, and another four runs in the 8th. The Rangers, meanwhile, were held scoreless for the rest of the game.

As a result, the Athletics win the AL West with an improbable record of 94-68, and will go on to face the Detroit Tigers in the American League Division Series. As for the two-time defending AL Champs, they must now face the Orioles in a one-game playoff play-in.

If only Josh Hamilton had made that catch…