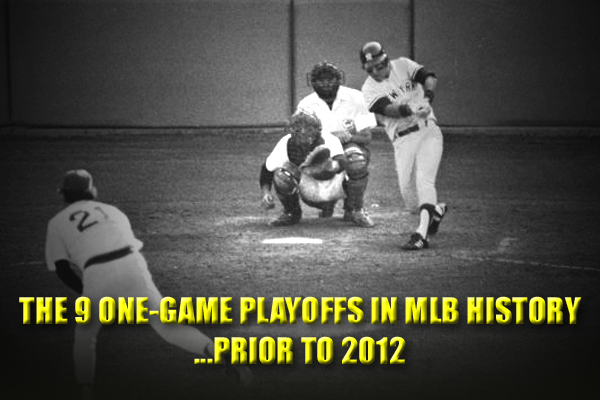 In the entire history of Major Leage Baseball, there have only been thirteen occasions in which two teams finished the regular season tied at the top of the standings. Of those thirteen ties, four were settled with a three-game series. The other nine? They were settled with a one-game, winner-take-all, loser-go-home playoff.

To the young’ins reading this, that small number may surprise you. After all, we’ve seen a number of one-game playoffs in recent years. But it’s true: ties in the standings have simply not been that common, so the one-game playoff has been a rarity.

However, that all changed this year. Drunk off a string of extremely exciting conclusions to the regular season, MLB has tinkered with the playoff formula this year so that two teams in each league will face each other in a one-game playoff to determine who takes the Wild Card. And, coincidentally enough, those two games go down tonight, with the Braves-Cardinals at 5PM EST and the Rangers-Orioles at 8PM EST.

Today, in honor of these two winner-take-all games, we’re going to have a look back at the 9 pervious times in the history of Major League Baseball that a single game has determined which team got to play postseason baseball. If today’s games are half as exciting as some of the ones on this list, we’re all in for a treat. 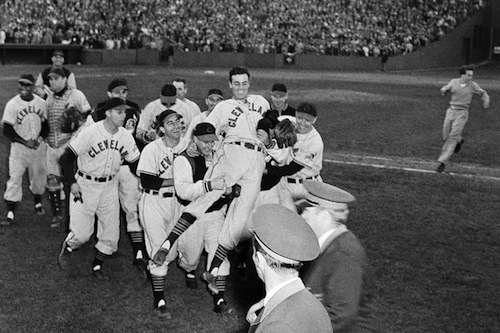 In 1969, MLB divided each of the two league into two divisions and introduced the Leage Championship Series to determine who goes to the World Series. But in the olden days, the MLB playoffs consisted solely of the World Series. That was it. You played the season, and at the end of it the best teams from each league battled it out for supremacy. For that reason, under the old system, when there was a tie at the top of the standings after all the regular-season games had been played, they wouldn't let it be decided by just one game. The standard practice was to play a full three-game series, and that's what they did in '46, '51, '59, and '62. But it's not what they did in 1948. That year, for some reason, they decided the American League Pennant with a one-game playoff between the Indians and the Red Sox after those two teams finished with identical 96-58 records. And the Indians won it, and the World Series. Unfortunately, as all Indians fans know, that was the Indian's last World Series title. 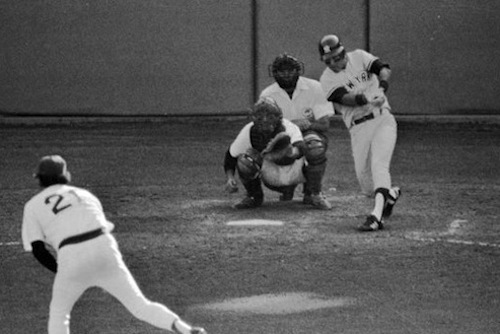 By 1978, the two leagues were subdivided into two divisions a piece and the LCS put in place to determine which teams played in the World Series. So, with the stakes of a tie-breaker significantly lowered, MLB switched from a 3-game series to a single game. And the first one-game tie-breaker played in this new era was between none other than the Yankees and Red Sox. Of course, we've told you about this one-game playoff before, as part of a list we did last year of the greatest collapses in baseball history. You see, the Sox had a 13-game lead over the Yankees in July of 1978. But the Bronx Bombers went 53-21 (.716) down the stretch while Boston went just 38-36. Then, in early September, Boston still had a four game lead over New York when the Yankees came to Fenway for a four game series. What happened? The Yanks won all four games, outscoring the home team 42-9 in what came to be known as "The Boston Massacre." (Well, as the other Boston Massacre. Anyway, the two teams finished in a tie for first place in the AL East at the end of the season, so they settled it in a one-game playoff. Boston had a 2-0 lead heading into the top of the 7th, thanks to a home run and an RBI single by Carl Yastrzemski. But then New York's Bucky Dent—a weak-hitting infielder who batted 9th in the Yankees lineup—hit the most famous home run in the history of this historic rivalry, a three-run shot that put the Bombers up for good, earning himself the nickname Bucky F*cking Dent" in Boston. Oh, and the Yankees went on to win the World Series for the second year in a row. 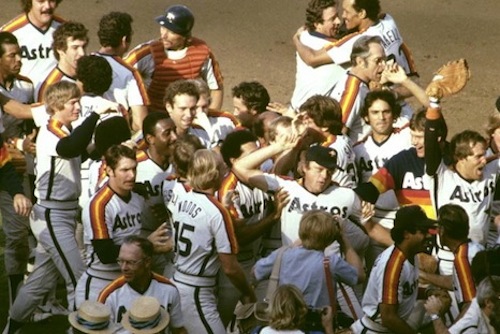 After finishing just 1.5 games back in the NL West standings in 1979, the Astros acquired future Hall of Famers Nolan Ryan and Joe Morgan in the offseason in hopes to getting over the hump. And for most of 1980, it looked like they had done just that. The 'Stros had a 3-game lead heading into the final series of the season. However, that 3-game lead was over the very team they were playing in that final series: the Dodgers. And of course, the Dodgers swept the Astros to tie things up. Interestingly, at that time, they decided the host of the one-game playoff by a coin toss. And it just so happened that the Dodgers won the toss, so the two teams stayed right where they were for one more game...which was won by the Astros by a score of 7-1. Of course, Houston then lost the NLCS to Mike Schmidt and the Phillies in 5 games. 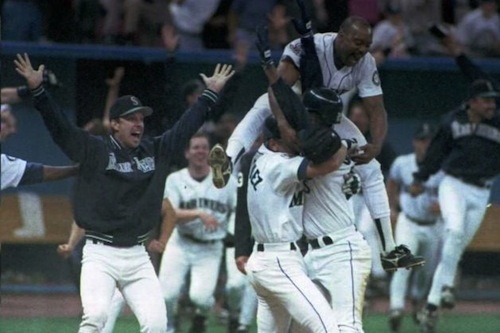 The Mariners and Angels finished the strike-shortened 1995 season with identical 78-66 records, necessitating a one-game playoff between two teams who were very unfamiliar with the postseason. The Angles, you see, hadn't made the postseason since 1986, while the Mariners had never played October baseball in their almost 20-year history. However, with some dudes named Ken Griffey, Jr., Randy Johnson, and Edgar Martinez leading the way, the M's earned themselves a one-game playoff for the AL West crown and won. That sent them to the first ever American League Division Series against the Yankees, which they also won. Then they lost the ALCS to the Indians. But hey, that wasn't bad for their first ever playoffs. 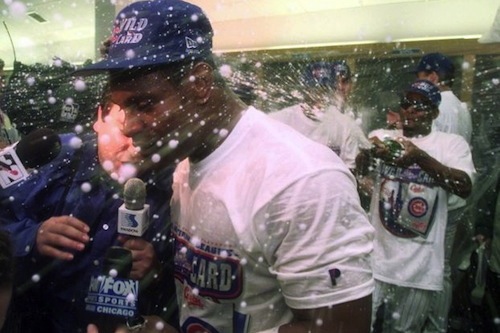 The two leagues were divided into three divisions in 1994, which introduced the wild card and an additional round of MLB playoffs. However, since the players strike cuts the 1994 season short and cancelled the postseason (sorry, Expos), the wild card era did not really begin until 1995. Then, in 1998, the very year that Sammy Sosa and Mark McGwire raced to defile baseball's most precious record, we had our first ever wild card tie. It was between Sosa's Cubs and Barry Bonds's Giants, who both finished the regular season at 89-73. The Cubs won the game, giving them their first postseason birth since the lost the 1989 NLCS...to the Giants. Of course, you obviously know that the Cubs did not go on to win the World Series. That drought it still ongoing. (105 years and counting!) 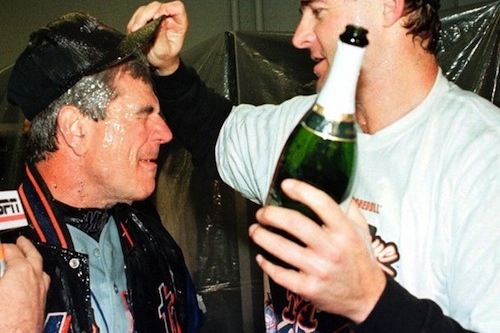 One year after seeing our first Wild Card tie, we saw our second. This time it was between the Mets and Reds, with both teams finishing with an extremely good 96 wins. In fact, this was probably the strongest postseason in MLB history, with none of the teams in the playoffs having fewer than 94 wins. Anyway, as good as both the Reds and the Mets were, only one would be the NL Wild Card. And that was the Mets. They beat the Reds in the one-game playoff 5-0 on the strength of a complete game shutout by Al Leite, then went on to beat the Diamondbacks in the NLDS before succumbing to the Braves in the NLCS. 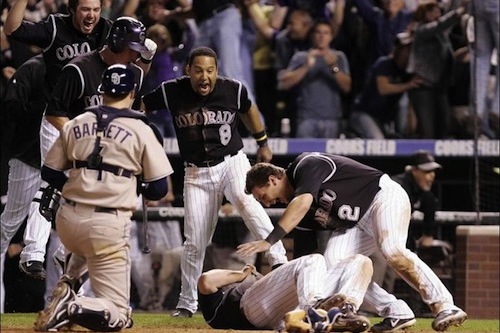 In 2007, the three teams at the top of the NL West gave baseball fans one of the most exciting finished to a regular season in baseball history. All season long, the Diamondbacks and Padres battled it out for first place. The Rockies, on the other hand, had gotten off to a putrid start, fired their manager, and had only managed to climb to an even .500 by the midway point in the season. Then they caught fire, going 46-29 in the second half and winning an incredible 11 games in a row in September. That winning streak put them 2 back of the division-leading Diamondbacks and just 1 back of the Wild Card-leading Padres heading into teh final series of the season—against the Diamandbacks. This meant that any scenario was possible after the final three games: the Padres, Rockies, and Diamondbacks all could have either won the division, tied for the division, won the wild card, tied for the wild card, or been excluded from the postseason altogether. Crazy, right? As it happens, the Rockies won 2 of 3 against the Diamondbacks to finish the season on a 13-1 run, while the Padres lost 2 of their last 3 games. That meant Arizona won the AL West outright, while San Diego and Colorado finished tied for the Wild Card and had to play one more game. And what a game it was! The lead changed 4 different times, and the teams went to extra innings tied 5-5. Then the Padres scored 2 in the top of the 13th, so, season over for the Rockies, right? Wrong. The Rockies would not die. Trevor Hoffman gave up doubles to Kaz Matsui and Troy Tulowitzki, then a triple to Matt Holliday that tied the game at 8-8. Finally, after the Pads intentionally walked Todd Helton, Jamey Carroll hit a deep fly ball to right field. Holliday tagged up at third, then headed for home, where he was called safe in a close play, winning the game for Colorado. Wow. 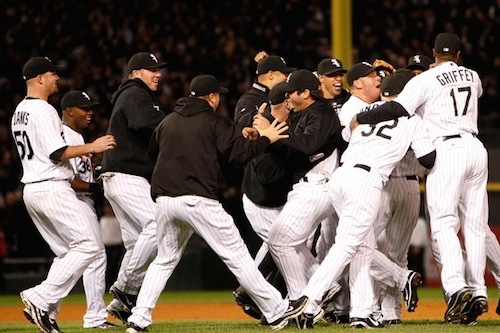 Just one year after the thrilling conclusion to the NL West race, the White Sox and Twins found themselves tied for the lead in the AL Central after 162 games. And it was almost as exciting as the year before. You see, the Twins only took a half-game lead in the division after sweeping the White Sox in the second-last series of the season. Then the maintained that lead through the next three games. But why was it only a half-game lead? Because the White Sox had a game rained out earlier in the season than they never made up. So, after the rest of the teams were done playing, the Sox had to make up that one game against the Tigers, and if they won, they'd be tied with the Twins and have to play them for the AL Central crown. And that's just what happened: the Sox won that game against the Tigers, tying the AL Central and forcing a one-game playoff against the Twins...which they won. 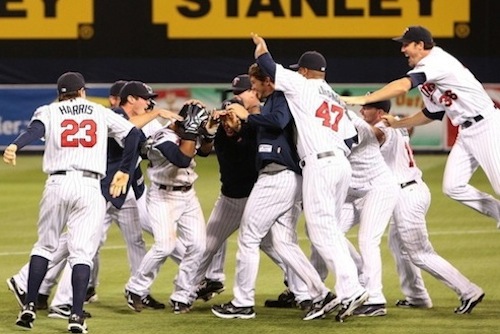 Three years in a row with the excitement of a one-game playoff determining a postseason berth? It made us spoiled, and this is why MLB changed the playoff format for this season that we always have not one but two one-game, winner-take-all situations. Anyway, in 2009 the Tigers held a 2-game lead over the Twins heading into the final three games of the season. So what happened? The Tigers lost 2 of 3 to the White Sox while the Twins swept the Royals. And Boom: all knotted up at 86-76. Then we got a winner-take-all game that was just as exciting at the one in 2007 between the Rockies and Padres. The Tigers went up 3-0 in the top of the 3rd. Then the Twins took a 4-3 lead in the bottom of the 7th. And of course the Tigers tied it up in the top of the 8th. So we went to extra innings. Top of the 10th? Tigers score one. Bottom of the 10th? Twins score one. Game tied at 5. Finally, in the bottom of the 12th, Carlos Gomez reached on a single, then advanced to second on a ground out, and was finally driven in on a ground ball by Alexi Casilla that found a hole. Game over, Twins win the division. Here's hoping the inaugural 2012 Wild Card Games are half as exciting at this.