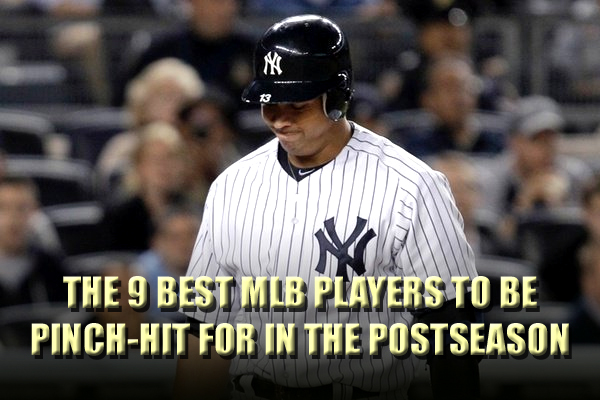 You may not have realized it, but something pretty rare happened at Yankee Stadium on Wednesday night: one of the game’s greatest hitters was pinch-hit for in the bottom of the 9th inning with the game on the line. I’m talking, of course, about Joe Girardi’s decision to lift Alex Rodriguez and replace him with Raul Ibanez. I mean, the Yankees were down by one run, and their manager replaced a guy who’s 5th on the career home runs list with 647 with a guy who’s tied for 172nd and actually four years older.

Now, that’s not a knock against the 40-year-old Ibanez. The guy is a real pro and a class act. But A-Rod is A-Rod. So this was a pretty big decision. So today, in honor of this rare occasion, I present this list of the best players ever to be pinch-hit for in the postseason with the game on the line.

Now, what do I mean by “with the game on the line”? Well, I mean a situation in the 7th inning or later in which the batting team is losing, and in which a home run would at least tie the game—just like Wednesday night in the Bronx. And how did I determine the “best” players? Well, I started with a chart produced by baseball-reference.com that lists the players with the highest career Wins Above Replacement total to be PH for. Then I took a look at the individual players’ seasons and ranked them accordingly

So who’s on the list? Let’s get started and find out.