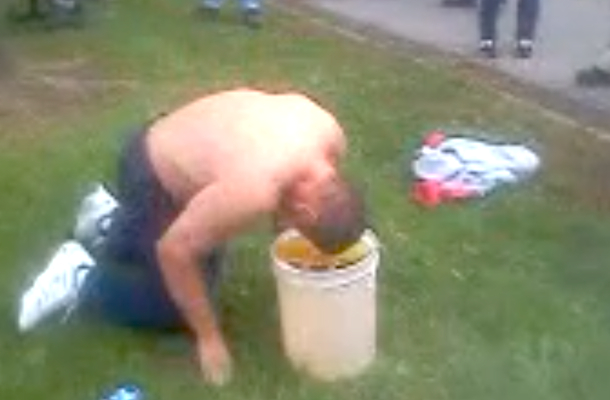 How much money would it take for you to voluntarily dunk your head into a bucket of urine?

Obviously the answer to that question depends on two things: your morale, and how badly you need the money. And no, it’s not at all hypothetical.

You see, recently some Cleveland Browns fans were tailgating before what they probably assumed would be another loss, when some dude named Phil voluntarily dunked his head in a 5-gallon bucket of urine for $450.

One of his friends begs him, “Don’t do it Phil!” But Phil does it.

Why? Who knows. He’s pretty ripped, so maybe he needed the money for steroids. Or maybe he’s just a typical Browns fan who has hit rock bottom. I don’t know. But it happened, and it’s revolting.

So now that you’ve had time to think about it and even seen a man do it, how much money would it take for you to dunk your head in a five gallon bucket of urine?

Also, while we’re asking probing questions…how long and how many dudes (or gals) does it take to fill a 5-gallon bucket with urine?