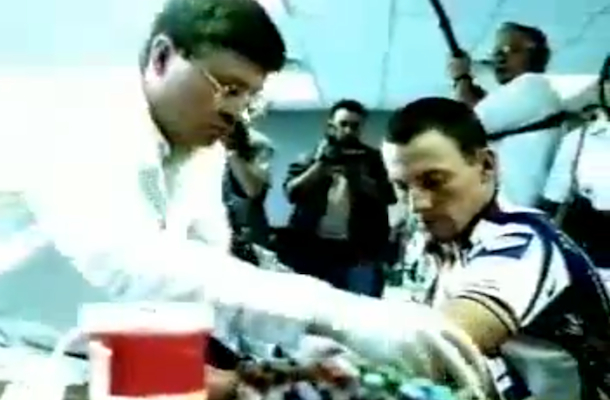 If you still don’t want to believe the USADA’s doping allegations against Lance Armstrong because you think they’re just out to get him, and if you don’t want to believe pretty much all of his former teammates who’ve said, “yes, he doped like it was going out of style,” then maybe you’ll believe Nike.

Yesterday, the sportswear giant announced that they were dropping Lance Armstrong, who they were paying a solid $7.5 million per year. Why? Because of what they called “insurmountable evidence that Lance Armstrong participated in doping and misled Nike for more than a decade.”

You’ll recall that, back in August, Lance Armstrong decided not to appeal the United State Anti-Doping Agency’s ruling that he had used PEDs and should have his Tour de France titles stripped. He said at the time that it was just a witch hunt, and he didn’t want to fight it anymore. But, reading between the lines, the decision not to appeal looked an awful lot like the actions of a guy who didn’t want any more light being shined on the situation. And then, just last week, the USADA released their report, and it was revealed that pretty much all of Lance’s teammates testified that they all used PEDs.

So now back to Nike. You see, they didn’t just market Lance as a champion. They marketed him as a hero of the fair play, anti-doping movement with commercials like this one:

So you see why Nike might be particularly upset. They put all their moral eggs in Lance’s basket, and the guy made an omelet.