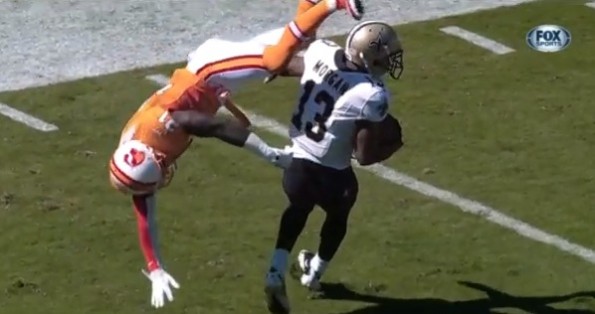 There were plenty of touchdowns being scored throughout the entire NFL on Sunday—59, to be exact.  Nine of those touchdowns came during the New Orleans Saints’ 35-28 victory over the Tampa Bay Buccaneers, and none were more  impressive and/or unusual than Joseph Morgan’s 48-yard touchdown reception from Drew Brees in the second quarter.

What made Morgan’s touchdown so impressive was his ability to stay on his feet after making the catch and elude three Bucs defenders, before scampering the remaining eight yards into the end zone.

As for the unusual part, that would have to be the manner in which Morgan eluded Eric Wright, as he was able to duck a tackle and send the Bucs cornerback soaring head-over-heels on the play.

You can watch this entire highlight reel touchdown unfold before your eyes in the video below.