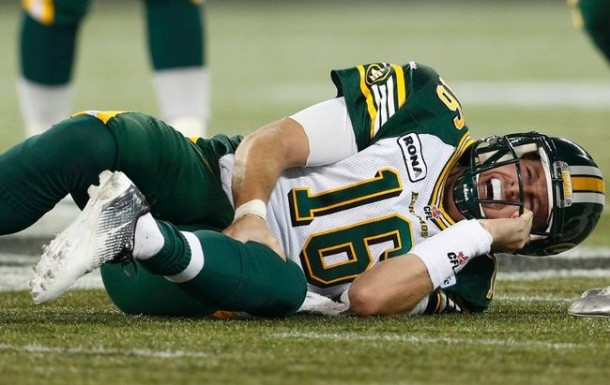 On Sunday, the Edmonton Eskimos took on the Toronto Argonauts in the CFL’s East Division semifinals.

It was not a good day for the team from Alberta.

Not only did the Eskimos get beat by the humiliating score of 46-26, but young quarterback-of-the-future Matt Nichols went down in the third quarter with what looked like a horrific, career-ending injury. And no, I’m not exaggerating. Check it out for yourself. It looks like the guy had his foot snapped right off his leg after getting dragged down by Toronto’s Ronald Flemmons.

(I’m going to assume that, having read the title of this post, you were expecting to see something gross, so we’ll forgo the usual warning.)

See what I mean? The foot is not supposed to point that way.

Amazingly, though, Edmonton trainers said after the game that it was “just” a dislocated ankle, and that no bones were broken. As a result, he was able to fly back to Edmonton with the rest of the team after the loss. Of course, I don’t think your ankle can do that without incurring some serious ligament damage. So I’m sure poor Nichols will still have a fair amount of rehabilitation in front of him.