21 GIFs of People Crying Over Sports 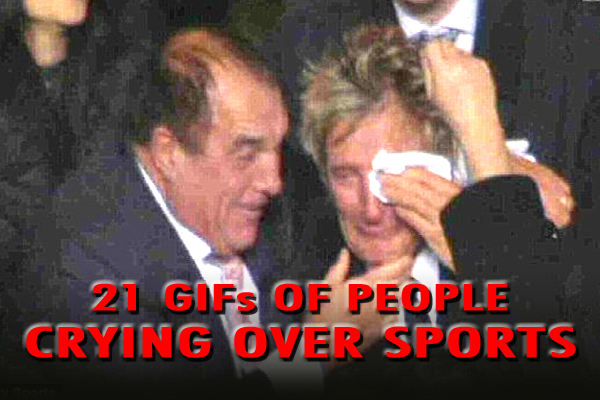 There may be “no crying in baseball,” as Tom Hanks famously said in A League of Their Own. However, regardless of whether that’s actually try of America’s pastime, it certainly is not true of every other sport on the planet. Why, just last week we saw pop music legend Rod Stewart sobbing like a baby after his beloved Celtic F.C. knocked off Barcelona in Champions League play—and they’re not even in the knock-out stage of the competition yet.

So obviously there is just something about sports that reaches deep into our psyches and touches on something profound. That, or some people are just way too obsessed. Either way, the point is that people cry at sporting events all the time. And while sometimes it’s moving, sometimes it’s hilarious, it’s pretty much always entertaining. Thus, you’ll want to check out our list 21 awesome animated GIFs featuring people crying over sports.

There's something hilarious about a guy in a goofy bird hat crying. Or maybe I just like seeing the Jayhawks lose because that "Rock Chalk" chant drives me bananas.

Okay, this one actually makes me legitimately sad. This poor band girl is just crestfallen.

The crying is one thing, the koala hat is another. It kind of makes her look like a preschooler or something, doesn't it? Actually, I'm kind of surprised they make hats like this in grownup sizes.

Get used to it, kid. You're an Arkansas fan, which means you're in the same division as Florida, Alabama, Georgia, and LSU. But hey, it could be worse. You could be an Ole Miss fan. (Burn!)

That's about as emotional as Germans get—just a single tear. Seriously, though, it had to suck to lose to the Italians.

Hines is sad because his Movember mustache isn't looking so good.

Now that he's a spokesperson for Uggs, Tom Brady is all in touch with his sensitive side.

Italians are so emotional. On an unrelated note, isn't it kind of strange Inter Milan had jerseys that looked like they belonged to the English National Team?

Old Sylvester Croom, Jr. just couldn't contain his emotions. He was probably upset that he was stuck coaching Mississippi State instead of his alma mater, Alabama.

Yeah, Derek, losing sucks man. However, I must say it's hard to feel bad for a guy who had five rings.

Mickie James definitely knows how to ham it up. Of course, in pro wrestling that comes with the territory.

See, now Steve Nash you can feel sorry for. He's old and has never won a championship.

How could we not feature one of the strangest sports moment in recent memory. Terrell Owens weird, teary postgame "that's my quarterback" speech after the Cowboys' playoff loss in 2008 was one for the ages.

This one is from last March. After losing to Swansea, Manchester City fans thought their shot a the Premier League title was gone. And this caused 26-year-old John Millington here to weep like a baby. However, City coach Roberto Mancini would later see the footage of this guy crying his eyes out and tell his team to go with the title "for that guy." And they did—true story.

No, he's not crying because he's leaving the Packers. He's crying because, after he texted a picture of his dong to that sideline reporter, Wrangler jeans doesn't want him as their spokesperson any more.

I think this is when Big Boss Man told Big Show that his father had died. Of course, he hadn't died. Yet. He did die later. But not for real—Big Show's actual dad had died years before this strange WWE plot line came about.

Standing around on the sidelines, this guy starting thinking about the Bette Midler movie Beaches. Man, was that a tearjerker.

Finally we've arrived at the weeping that inspired this list in the first place. After Celtic's improbably, incredible, impossible win last week over Barcelona, one of the greatest teams in the world, Scottish rocker Rod Stewart was crying like a baby. Why? Well, for one he's a lifelong fan of Celtic, and that win was historic for them. But two, as he later explained, it brought back memories of watching the team with his deceased father, Robert, and he suddenly thought how happy his father would have been. Pretty touching stuff, isn't it?

And now we go from truly touching to flat out embarrassing. This kid wasn't crying because his team won. He was crying because they lost...a regular season game. Oh no, so sad!

This is the exact moment when poor Cristiano Ronaldo remembered that he forgot to pack his exfoliating face cream.

For some reason, I find this one absolutely hysterical. I hope you do, too, because it's our #1 sports crying GIF.