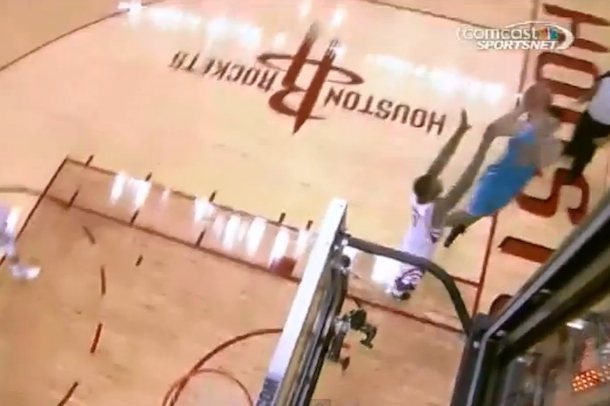 Of course, none of those numbers put him in legendary company, but a play he made last night in Houston against the Rockets did…sort of.

You see, in the 4th quarter with his team down nine points, Anderson sunk an amazing shot from behind the backboard. Just take a look:

Did you catch the announcer saying that the last person he saw do that was Larry Bird?  Well, just so you can compare, here is Larry sinking a shot lofted over the backboard:

Unfortunately, when Larry did it, the play was illegal. Or, at least the announcers in that video thought it was. It certainly still is illegal in college ball. However, in the NBA today, the shot counts so long as it doesn’t hit the back of the board or the shot clock. And that actually makes a lot of sense—the ball isn’t considered out of bounds when it’s in the air over the sideline, so why should a shot from behind the backboard not count so long as it doesn’t touch anything?

Of course, going back to Anderson’s basket, the announcer from that game doesn’t seem to have a very good memory. Bird was hardly the last guy to make a shot from behind the backboard, and he certainly wasn’t the first.

Want proof?  Take a look at this: