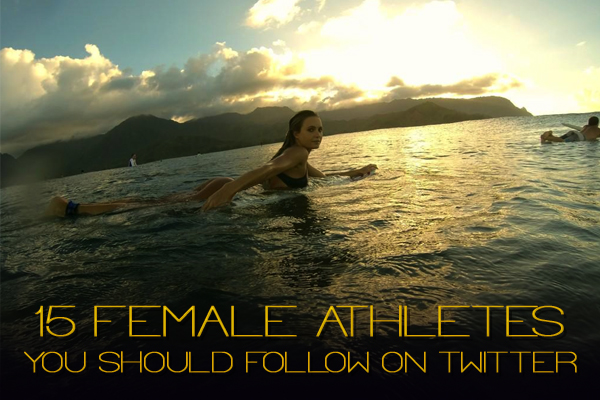 Twitter gives the general public access to private lives and thoughts of celebrities like we have never had before. And to be quite frank, most of the time this is a bad thing. (Have you ever seen Heidi Montag’s Twitter feed? Yeah.) However, with a select few, such access can be enlightening and entertaining.

This is especially true of elite athletes. When they are candid and open and share their lives, they actually give sports fans a sense of what it would actually be like to play sports for a living. And of course, when these athletes happen to be attractive and female, well then that’s even better.

So if you’re looking for some new people to follow on Twitter, today we have some recommendations. These female athletes have interesting things to say, are fairly candid, and tend to post entertaining (and occasionally sexy) photos of themselves and their friends. Follow them. You will not regret it. 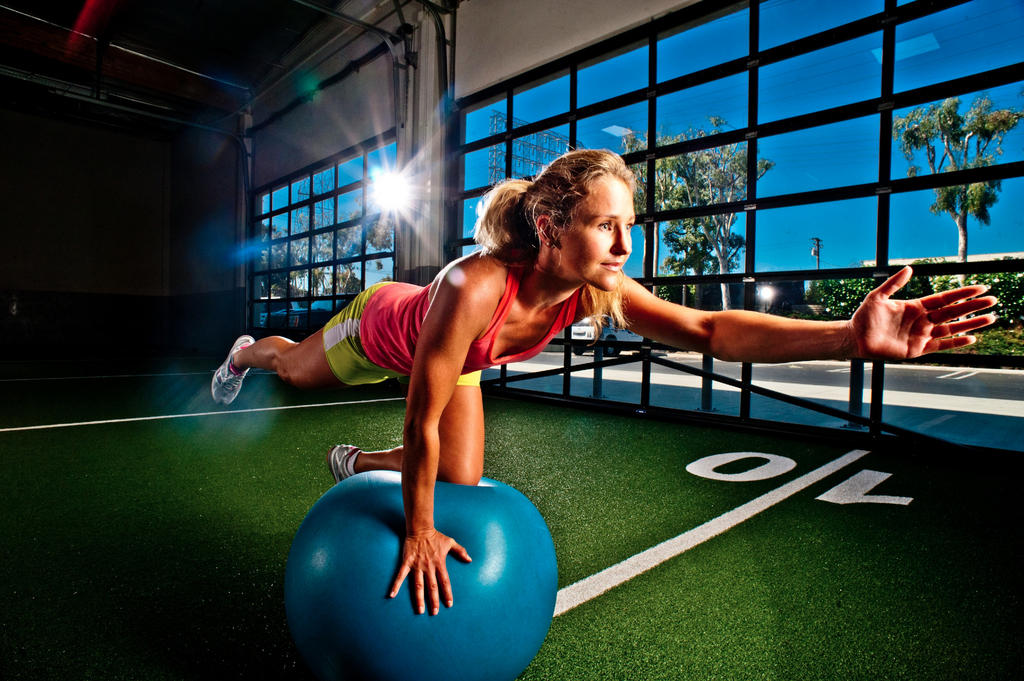 Snowboarders tend to be fun people. They tend to hang out with other fun people. And they tend to travel to interesting place. Do the math; follow Gretchen Blailer. Her actual tweets? Well, they can be kind of boring. But she snaps fun photos—dogs in costumes, scenic landscapes, her training—so her feed it worth a look just for that. @GretchenBleiler 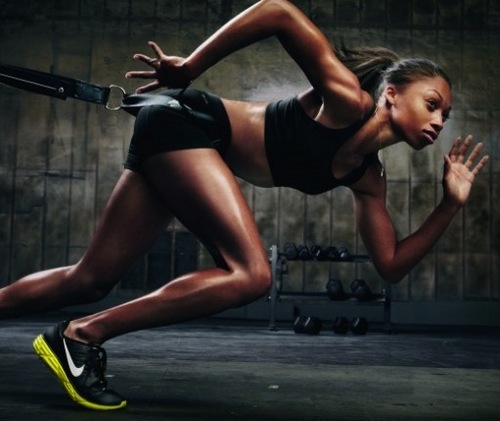 Allyson Felix, in addition to being pretty hot and a tremendously gifted athlete, also seems like a pretty cool person who's involved in a number of good causes. Plus she tweets tons of great pics. Did I mention she is gorgeous? Oh, right, I did. @allysonfelix 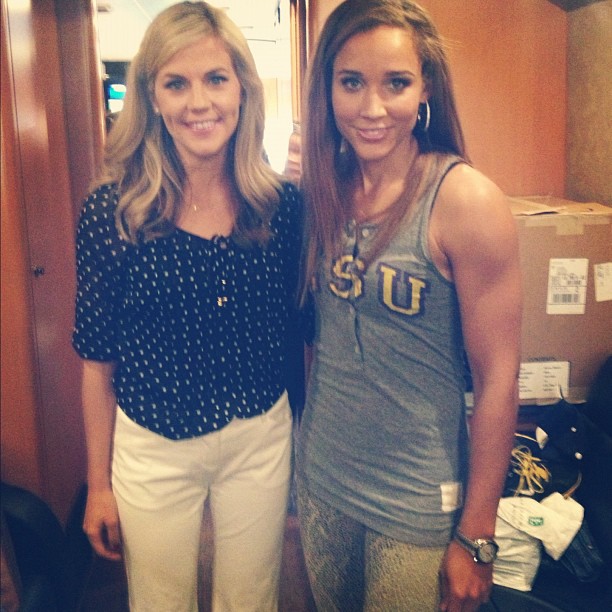 Lolo took a lot of crap (from the New York Times) for getting more attention than she supposedly deserved at the 2012 Summer Olympics simply because she is hot. However, if people had bothered to check out her Twitter feed, they would have discovered that she's also genuinely funny* and down to earth—the kind of chick it would be cool to hang out with at a sports bar. So I say she deserved every bit of attention she gets. *ESPN's Samantha Steele tweeted this pic and said it was nice to have another woman on the bus. Lolo Jones replied, "This is awkward. Espn didn't tell u? I'm here to apply for ur job." @lolojones 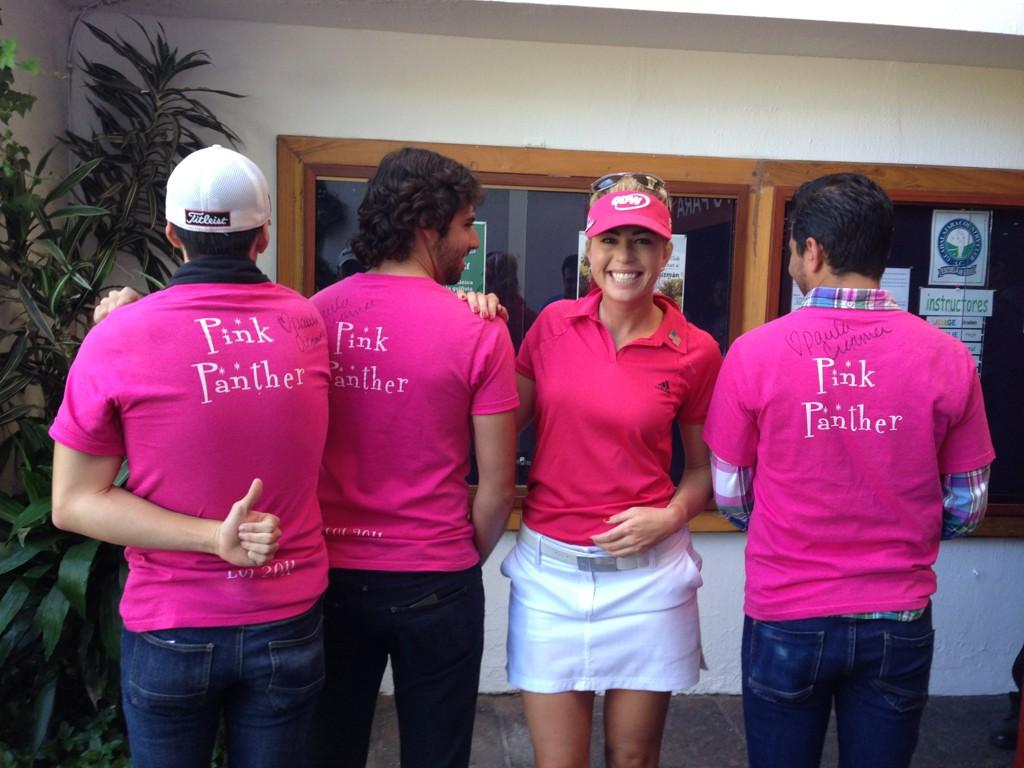 Paula Creamer has been one of the most popular golfers on the LPGA Tour pretty much since the day she joined. It's easy to see why. "The Pink Panther," as she is called, keeps it real on her Twitter feed, posting random thoughts (e.g., she really likes the Starbucks non-fat peppermint latte), updates about her schedule, and candid photos from her everyday life. @ThePCreamer 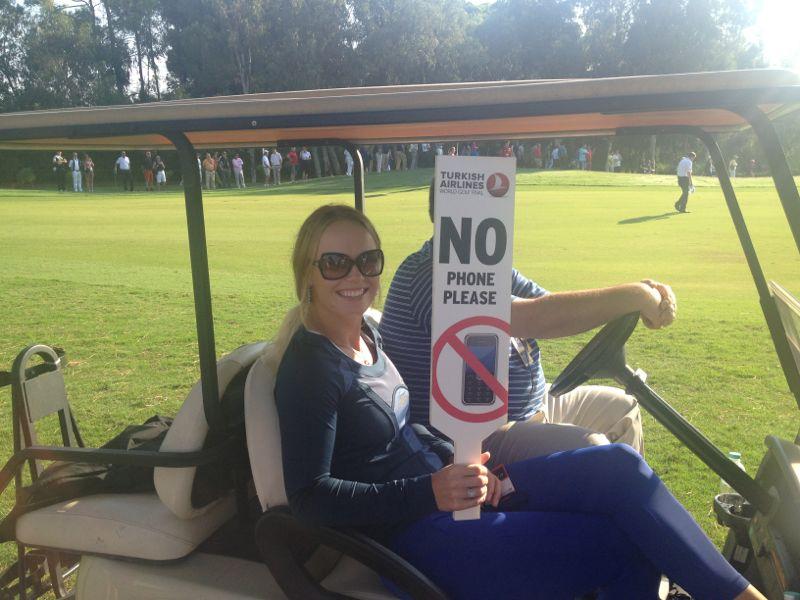 For being one of the most famous and richest female athletes in the world, Caroline Wozniacki seems pretty down to earth. Her Twitter account isn't run by her publicist; it's just a straight forward look at her life—which looks pretty great. If you can withstand the mushy tweets about all the sweet things her boyfriend (some guy named Rory McIlroy) does for her, then you'll also get a behind the scenes look at what it's like to be a tennis superstar. You can definitely tell she's part of the generation that grew up with social media and had no reservations about sharing her life with the entire world. However, she's not shallow and vapid like to many other women her age. I highly recommend her Twitter feed. @carowozniacki 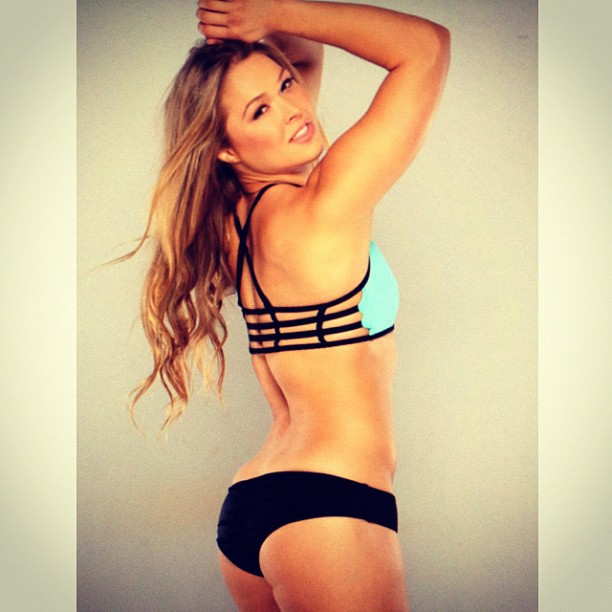 I find this Olympic gold medalist-turned-MMA star quite fascinating. When she's in the ring, with her hair pulled back tightly, she looks like such a badass. When she's out of the ring, she looks like your typical girly girl. There's something about that juxtaposition that is just awesome. Consensus #1 pound-for-pound female MMA fighter in the world on the one hand; super hot, fun-loving model on the other hand. @RondaRousey 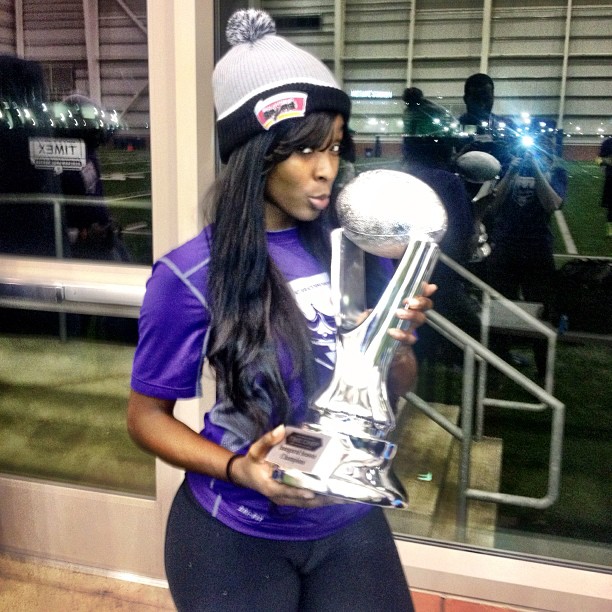 Tanyka bills herself as a "Renaissance woman"—athlete, fitness and nutrition professional, model, author, entrepreneur, humanitarian. I have no way of verifying her credentials as a nutrition expert or humanitarian, but I can vouch for her claims to being an athlete and model. Renee plays on the offensive line for the Philadelphia Passion of the Lingerie Football League, and her Twitter feed is full of interesting photos. @jockintanyka 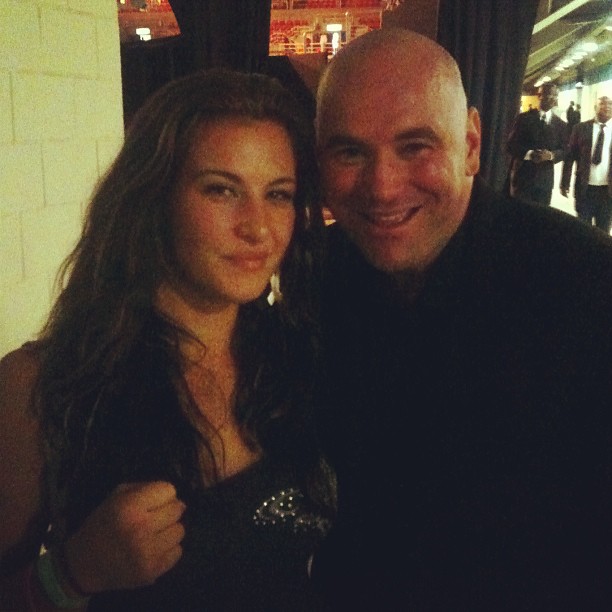 I don't know how Dana White (pictured here with Miesha) does it. The guy consistently signs gorgeous women who are legitimate fighters to compete in the UFC. Is he the best businessman in pro sports today? Anyway, Miesha "Cupcake" Tate's Twitter feed is full of gems. Check it out. @mieshatate 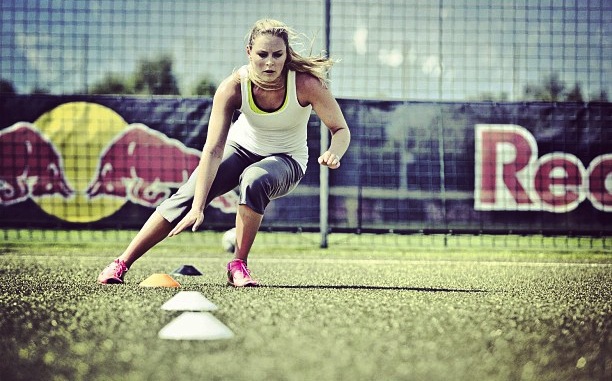 Lindsey Vonn is probably the most dominant female athlete in the world today, having won 4 of the last 5 World Cup championships. But on top of that, she's also ridiculously attractive and travels to incredible places all over the globe. So there's always something good to check out on her Twitter page. @lindseyvonn 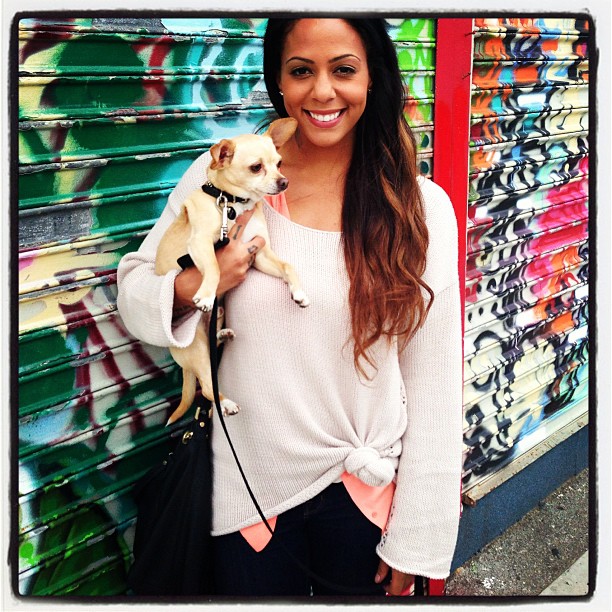 Sydney Leroux isn't quite as famous as the next two women on our list, who are also members of the U.S. Women's National Soccer Team. She just made her major international debut this past summer at the Olympics. However, I think it's only a matter of time before she's right up there. She certainly grew her reputation this fall when she and the woman at #5 wore matching (and extremely awesome) halloween costumes... @sydneyleroux 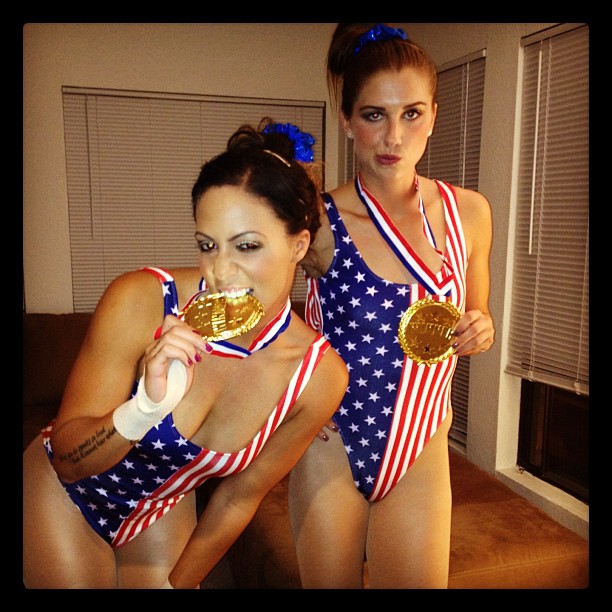 If this photo of Alex Morgan and Sydney Leroux dressed up as McKayla Maroney and Gabby Douglas doesn't convince you to follow them on Twitter, nothing will. These two are the future of American women's soccer, and they are awesome. @alexmorgan13 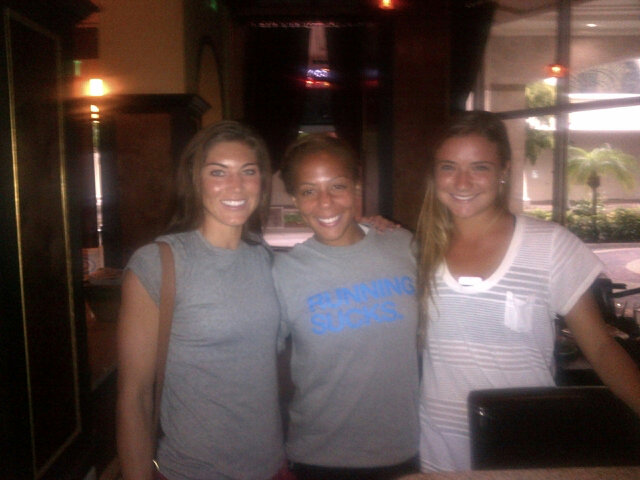 Hope Solo didn't have a lot to say on Twitter regarding her recent much-publicized domestic altercation and marriage to former Seattle Seahawk Jerramy Stevens. All I could find was one re-tweet of something one of her friends said about true love winning in the end. However, for the most part, you can expect some pretty candid tweets from Ms. Solo. Just ask Brandi Chastaine. @hopesolo 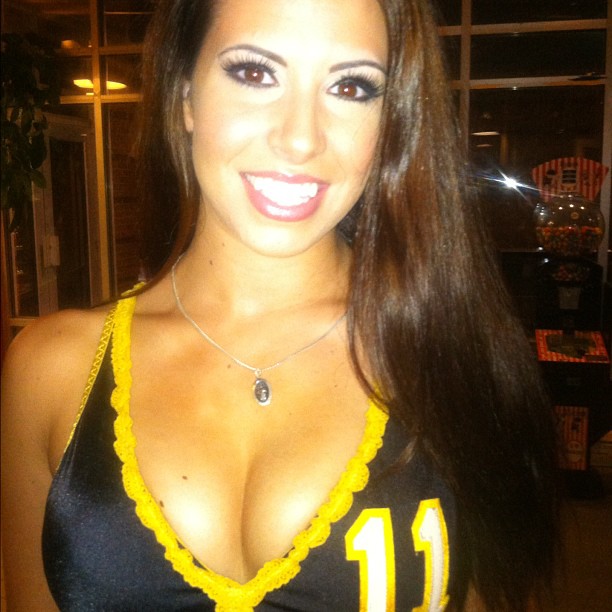 This LFL quarterback is the daughter of—yep, that's right—former NFL QB and two-time Super Bowl Champion Mark Rypien. So she's got legit genetic ability. Of course, she's got other legit genetic "talents" as well, but she didn't get them from her dad. Hopefully the LFL will return to the U.S. market again in 2013 so we can see Angela back in action. @Angela_Rypien 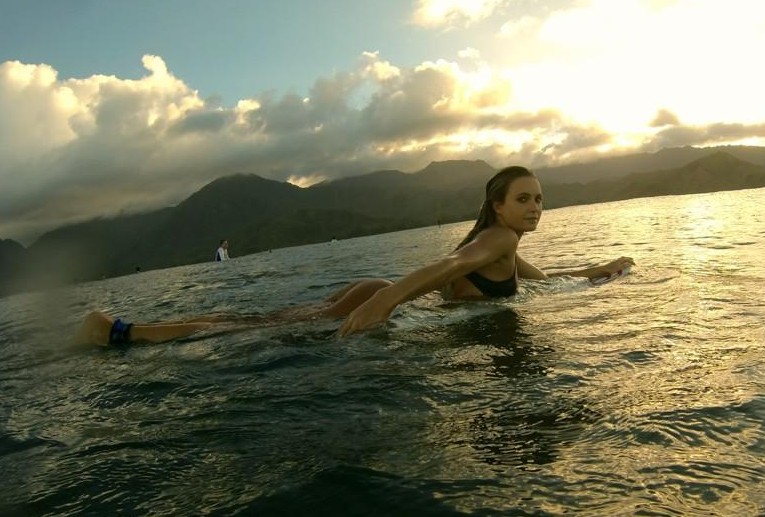 This is an example of the kinds of photos pro surfer (and pro bikini model) Alana Blanchard likes to tweet. I assume that is all I need to say. You're probably not even reading this sentence because you've already clicked on the link below and are currently looking at her Twitter page. And I don't blame you. @alanaRblanchard 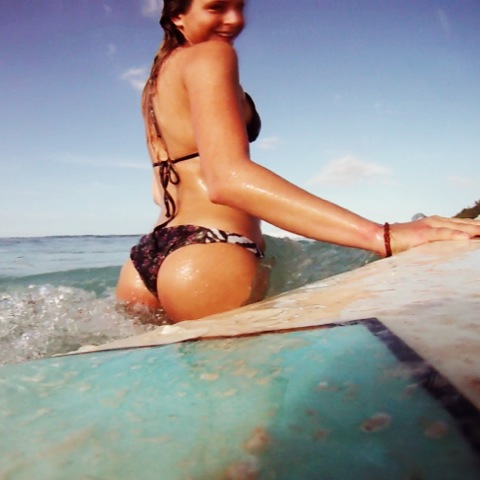 I'm pretty sure 75% of female pro surfers are also bikini models, and Anastasia Ashley is certainly part of that majority. In short, if you're not following her, you're a crazy person. She is the kind of person that makes people sign up for Twitter in the first place. @AnastasiaAshley