That Kid with the Johnny Manziel Hair Cut? Yeah, He Got Sent Home from School
Football NCAA

That Kid with the Johnny Manziel Hair Cut? Yeah, He Got Sent Home from School 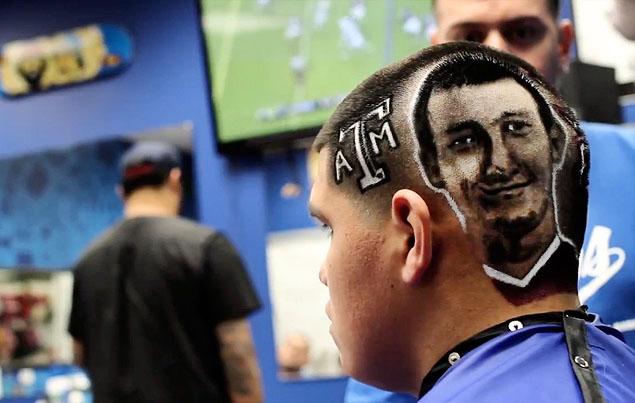 Yesterday we told you about the amazing Johnny Manziel haircut San Antonio barber “Rob the Original” gave to one lucky Texas A&M football fan. However, at the time we did not know who that lucky fan was.

Christian Chavez is a 17-year-old high school student from Kerrville, Texas. Like everyone in his hometown, Chavez is a huge fan of Manziel, who went to high school there. So when he saw on Facebook that “Rob the Original” was offering free “Johnny Football” haircuts to anyone who wanted one—featuring Manziel’s likeness, nickname, and the Aggies logo—the Texas A&M fan jumped at the chance, even though the barber was a 90 minute drive from his house.

Afterward, he was thoroughly pleased. “I love the haircut,” Chavez explained. “I’m a big fan of Johnny. My parents love it, too. They like Johnny. My older brother played with Johnny.”

Unfortunately, the Kerrville Independent School District did not like Christian’s new do. So they sent him home from school on Thursday.

Their public relations specialist explained, “We appreciate the young man’s enthusiasm for Johnny and everyone in the community is just as excited.” Nevertheless, according to the district’s official policy, hair “must be clean and neatly groomed. Only natural hair colors are acceptable. Hairstyles that are distracting are not acceptable.”

So what’s Chavez going to do?

Well, he’s going to shave the hairdo off, obviously. But not until Sunday. So what if he misses another day of school? It’s worth it.