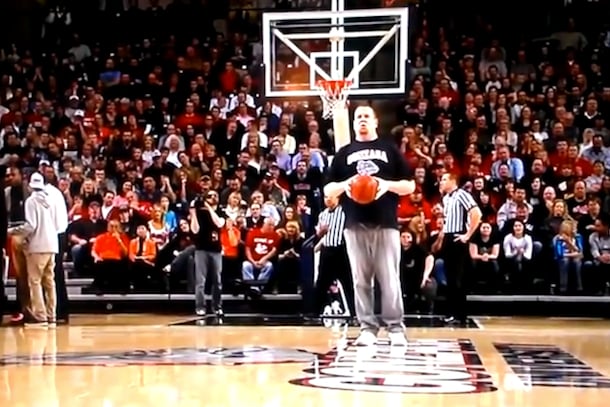 Like pretty much every basketball team in America, the Gonzaga Bulldogs bring one lucky fan out onto the court at halftime and give him, or her, the chance to win something by sinking a half-court shot.

I don’t know what the Zags offer as a prize, but I’m sure it’s decent. After all, unless the person selected from the crowd happens to be this guy, the odds are always going to be in the team’s favor. And I’m pretty sure you can get insurance to cover these sorts of contests. So why not offer something good?

That being said, even if the prize for hitting the half-court shot at a Gonzaga basketball game was getting punched in the gut by Mike Tyson, the guy you are about to see would have still been disappointed in his failed attempt. Because you see, he didn’t just miss the shot. Oh no. Rather, he offered up what has to be one of the worst half-court shots ever attempted by a full-grown human male.

If a kid did this or, say, a 65-year-old grandma, then, yeah, it wouldn’t be that bad. But an adult man? Wow, that’s embarrassing. And you can tell this guy felt the full force of the embarrassment immediately after the shot, as he slaps his palm to his head in disgust.

I feel for you, buddy. Better luck next time.