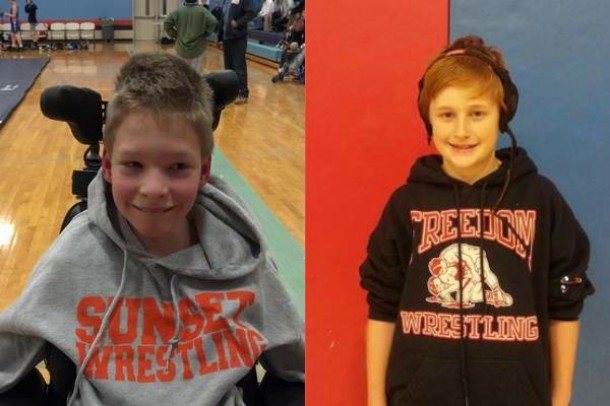 When I grow up I want to be like 13-year-old wrestler Justin Kievit of Nolensville, Tennessee.

Why? Well, to answer that I have to tell you about another 13-year-old boy from Tennessee named Jared Stevens.

You see, Jared has cerebral palsy, a condition which confines him to a wheel chair. Like most boys his age, Justin is crazy about sports. But unlike most boys his age, he really can’t participate in most of them. One exception, however, is wrestling. If there’s one thing Jared can do like a pro, it’s roll around on the ground.

So with the help of his special education teacher and school wrestling coach, Jared Stevens started wrestling. However, he obviously never expected to win.

That’s where Justin Kievit comes in. This kid recently had to face Stevens in a match and, even though the two had never met, Kievit realized that he could give something to his opponent that he might never get a chance to have again: the taste of victory.

Yep, that’s right. When the match began, Kievit got right down with Stevens on the mat, sparred with him for a bit, then pulled his arm over the top of him and let Stevens pin him for the victory.

In a world where professional athletes act like morons and spoiled brats on a daily basis, to see a 13-year-old kid with so much class, integrity, and humanity really is humbling.

Thanks a lot, Justin Kievit.  You truely are an inspiration.