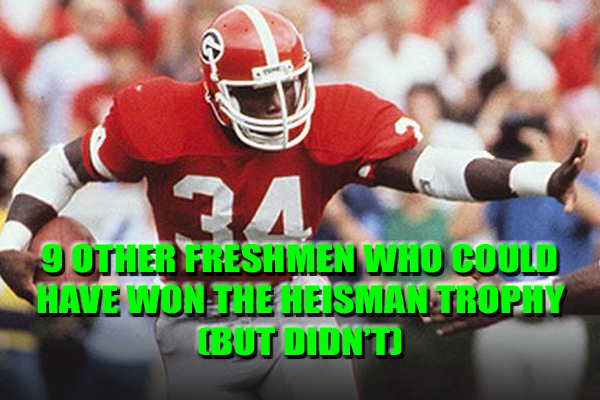 On Saturday night, Texas A&M quarterback Johnny Manziel became the first freshman to win the Heisman Trophy in the 78-year history of the award.

Why did it take so long? Well, there are a couple reasons. For one, freshman only became eligible to play varsity NCAA football in 1972, which meant before that there weren’t even any potential candidates. However, even since 1972, there has been an unwritten rule that freshmen simply do not win the Heisman.

Why was that rule in place? Who knows. I guess voters (mostly sports journalists) thought a kid had to “pay his dues” before being named the best college football player in the country. But whatever the reason, the result of this unofficial policy was that, over the years, a lot of great freshman seasons got overlooked for the award.

In short, just because Johnny Football was the first freshman to take home to Heisman, that doesn’t mean he had the best freshman season in the history of college football. It just means that voters have finally decided to ditch their silly “freshmen don’t win the Heisman” rule. So today we’re taking a look at some of the other great freshman seasons in college football history that could have won the Heisman.