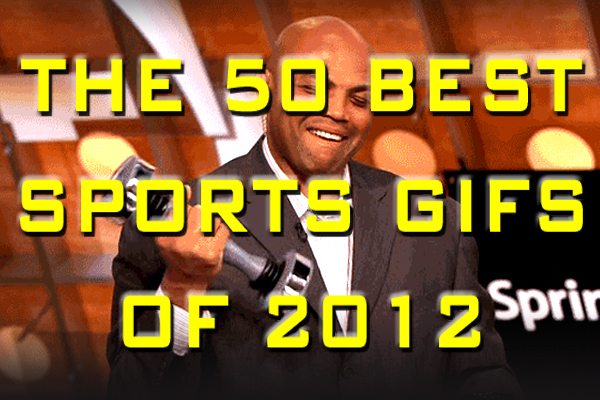 Anyway, like yesterday’s list, we’re not trying simply to find the definitive moments, plays, or stories. Sure, these moments, plays, and stories did play a role in selecting the top 50 sports GIFs of the year. But sheer awesomeness (regardless of significance) played an even bigger role in whittling down this list.

So sit back, grab yourself a refreshing beverage, and take an animated, looping stroll through recent-memory lane. It’s definitely not a waste of your time. (Though, yeah, it is still a waste of your employer’s time. Sorry, employers!)

We kick things of with the Miami Heat's Chris Bosh being intentionally hilarious...

Here the Houston Texans' Danieal Manning demonstrates how not to catch a football. Thanks, Danieal.

Silly Spaniard. He thinks that hot dog is a weird floppy cigar. He must have been very disappointed when he tried to light it.

Look, I know race walking is actually very grueling and required lots of training and stamina. But the concept itself—seeing who can be the fastest at going slow—is just so funny that it makes moments like these seem hilarious.

There were three athletes at the Summer Olympics who got to compete without a country. As you can see, they made the best of it.

This is Arizona quarterback Matt Scott showing what happens when you get too many concussions and your coaches don't make you sit out.

Josh Weeden found out the hard way that the giant American flag don't stop for nobody.

Andrew Bynum was supposed to be a huge offseason acquisition for the 76ers that would take them to the next level. Instead, he's been out all season with a bruised bone in his knee, and a few weeks ago he re-injured himself...while bowling. This is an artists' rendering of what it probably looked like.

The people of Charlotte have interesting taste in halftime shows.

Remember this? The Korean fencer got royally screwed by the fencing officials, who let this impossible match-winning strike stand even the the clock never started. Then the Korean fencer protested the situation by sitting on the mat for an hour, crying.

I'm sure I would have reacted the same way. Nevertheless...let's all make fun of Ian Rappaport!

Why is this Tennessee fan shaking imaginary salt shakers into his mouth?

The Gators lost one game this season, and that cost them the opportunity to lose to Alabama in the SEC Championship Game. This was that game. Coach Will Muschamp was not pleased.

A late season loss by Manchester City seemed to doom the team's hopes of winning the Premier League title last season. But the story goes that Manchester City's coach used this fan's reaction to rally his team to an almost impossible and certainly history comeback. This pretty much explains everything you need to know about soccer in England.

Legendary rocker/singer Rod Stewart shed a few tears himself in November when his beloved Celtic knocked off the best team in the world, Barcelona, in Champions League group play.

At the 2012 Masters, Louis Oothuzien had one of the best holes in pro golf this year—and maybe one of the best shots ever at the Masters—when he shot an albatross on a par 5. Unfortunately, that same tournament, he also gave us one of the year's worst high-fives.

In world sports, this was probably the most famous celebration of the year. However, in my opinion, it wasn't nearly as awesome as this one...

The Colts are having an absolutely magical season. Robert Mathis is enjoying it.

31. When Did Robert Mathis Join the Ballet?

Hey, lady, you can't do that to The Admiral.

30. Photobomb of the Year

This ref dodges high fives like Neo dodges bullets in The Matix. I wonder if he also knows Kung Fu?

Whatever just happened, it was worth a dramatic taking-off of the sunglasses.

I don't think Derrick Rose likes LeBron all that much.

I don't know what this guy coaches, but he was not happy.

What can I say? Shaq really wanted to get to the candy inside that piñata.

When the Patriots travelled to London to play the Rams, Gronk treated the home town to a very special touchdown celebration inspired by some local celebrities.

Yep, it sucked to be sitting next to this guy.

U.S. gynmast Aly Raisman's parents were unexpected stars of the 2012 Summer Olympics (at least in North America). Of course, their anxious reactions to their daughter's every move wouldn't have been so entertaining if she hadn't won two gold medals. If she had finished, say, 20th, it just would have been sad.

Chael Sonnen always has something to say, and it's always pretty douchey. So it was pretty nice to see him whiff like this against Anderson Silva. And of course, about 2 seconds after this GIF, Silva ended the bout with a knee to the chest. Then Steven Seagal took the credit.

This was easily the most amazing new fitness machine released this year.

I don't even know what to say about this one.

Hope Solo is a bit of a hothead who shoots her mouth off at the wrong time, but you have to admit two things: she is pretty hot, and she performs well under pressure. This save, for example, helped win the U.S. the gold medal.

There were a number of notable cheap shots in the NHL this year. But this one takes the cake. You do remember the NHL, don't you?

This guy knows how to celebrate a big win.

And this guy knows how to celebrate an awesome catch.

Who doesn't love a guy in a Union Jack hat doing bird balls to interrupt a Bob Costas interview?

This guy was definitely not feeling the "Olympic spirit."

If they ever make another Karate Kid movie they should sign American judoko Nick Delpopolo to play the bad guy.

This is one of the weirdest things I have ever seen on a basketball court.

McKayla Maroney did more than just look unimpressed at the 2012 Summer Olympics. She also performed one of the most amazing vaults in Olympic history—at least if you're going to judge by this official's reaction.

If you live next door to this guy and you haven't seen your cat in a few days, I've got some bad news for you.

Ohio State's Devin Smith made the catch of the year in the first game of the season. Not bad, huh?

This was one of the most amazing plays of the 2012 Summer Olympics, and it made for one extremely mesmerizing GIF.

If the last entry was one of the best plays of the London Games, surely this one was the absolute worst.

Silly German guy. That ice is too thick. If you haven't seen the video for this, you should check it out.

Australian hurdler Michelle Jenneke took the internet by storm this summer with her amazing pre-race routine. The world is grateful.

This kid has never seen a chick like this in real life, up close and personal. Obviously, his dad needs to pull him aside and explain how to be a bit more subtle. In any case, this is definitely the best and funniest sports GIF of the year. I hope it brightened your day.